Zambia, November 30th, 2016: While in 2015 the International Judo Federation, through the activities of its Judo for Peace Commission, launched its first programme in the Syrian refugee camps on the Turkish border (watch the video), a new program to support refugees was launched a few days ago in northern Zambia. 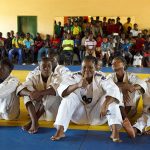 Vibrant and Exciting Ceremony
The Maheba refugee settlement, which is located 13 hours away by road from the capital Lusaka, was the setting for a vibrant and exciting ceremony. Today Maheba welcomes nearly 20,000 refugees from nine African countries. Among these thousands of displaced families live 10,000 children. Faustin is a young Burundian living in Maheba since January 2016. A black belt judoka, he has just been appointed as the coach of the refugee programme: “This is a fantastic chance for all of us. Life is not easy and having something to do such as judo, first of all offers us a structuring activity, but also opens up new opportunities for us to restart in a positive way our lives.“

Numerous personalities and organisations were present at the official opening of the programme, which in fact has been in operation for several weeks already. Judoka from Lusaka also made the trip. The IJF offered equipment (tatami and judogi) which will enable an extension of the programme.

Hope to our Friends in the Refugee Family Through Judo
Alfred Foloko, President of the Zambia Judo Association declared: “It is my pleasure and honour to welcome you all to the official launch of the Judo for Peace ceremony where we have partnered with a lot of stakeholders to bring hope to our friends in the refugee family through judo. We have seen the number of refugees rising and the implications of this scourge on peace and security should concern all of us. Therefore, the initiative by the International Judo Federation to come with this important project cannot be over emphasized. The main objective of the Judo launch at Maheba refugee settlement is to promote peace and unity among the different nationalities and the surrounding communities. We use judo as an education tool to bring about peace and unity among different people regardless their political, gender, cultural, religious affiliation. By training judo and follow the statement done by Jigoro Kano, the founder of our sport, a person will develop social skills that can be used to develop just society and help person in need.“

Mr. Foloko took the opportunity to thank all the skateholders who participated in the opening of the programme: “It wouldn’t have been possible to launch that great initiative without the support of International Judo Federation President Mr. Marius Vizer and the IJF Judo for Peace commission, represented by Mr. Nicolas Messner. We also received the support of Norwegian Olympic and Paralympic Committee (NIF) and of the ‘Judo for Fred‘ committee represented by Mr. Ole Moland, which has been very active in Zambia for many years. Judo for Fred developed an extensive programme in Livingston and we hope that we will be able to cooperate here in Maheba as well. Our own National Olympic Committee, the National Sports Council of Zambia as well as the Zambian Police forces are also involved. And without the camp authorities and the local representatives of the UNHCR nothing would have been possible. I want also to express my sincere gratitude towards the Zambian government.“

Promote Peace Through Sport
Mr. Chabi Chondoka, representing the National Sports Council of Zambia said: “I am very pleased to be part of this important launch of the judo for peace programme in Zambia. I would like to commend the International Judo Federation and the Zambia Judo Association for organising such an important project. This is a deliberate initiative to get more of our friends from war affected neighbouring countries come together to promote peace through sport. As we all know, the growing availability of instability in post-conflict situations has been and still remains a major factor in the rapid upsurge in the number of conflicts. This had the effect of not only hindering the social-economic development, long after conflicts have ended, but creating humanitarian crises, environmental degradation and increased poverty in our region. Allow me as well to stress the importance of the involvement of women in all our efforts. It is indeed overwhelmingly evident that women have the virtues that can engender peace and bring about the necessary progress that has eluded us for so long.“

Legal Framework and Generosity
Inspector General of Police Mr. Kakoma Kanganja said: “It is indeed a great honour to have the opportunity to host this very important initiative that will set the tone for a more proactive plan of action towards eliminating conflicts within our refugee community. The Zambia Police is committed to cultivating rapport and partnership with the community and is obliged to respect individual human rights while recognizing the community’s expectations and obligations. Zambia has contributed immensely to humanitarian work by providing agricultural land and education to refugees and asylum seekers. Our country has always desired to find solutions to the plight of refugees by providing security, social and economic amenities. May I applaud the International Judo Federation and its member states for formulating regional and international laws that govern the treatment of refugees and internally displaced people through sport. The legal framework, coupled with generosity has made judo stand out in terms of good treatment or refugees and asylum seekers. As a black belt judoka, I am very much alive to the fact that some of the objectives of Professor Kano are to ensure that each individual should strengthen his/her body, develop intellect and morality, and cultivate attributes beneficial to society and that citizens should repost society and seek to assist in bolstering national prosperity.“

Mr. Abdon Mawere, Commissioner for Refugees, said: “The launch of this programme in collaboration with the IJF Judo For Peace commission is a welcome development for the community in Maheba. The launch marks the judo association’s partnering with the government in the protection and assistance of refugees in Maheba. Through their perseverance and courage, our brothers and sisters who had to flee from their country, but who have dreams, hopes, experiences and skills are committed to rebuild their lives in peace and dignity in Meheba. We are delighted that the IJF and all the shareholders are not only coming to Maheba for the sport but more importantly as messengers of Peace through the judo for peace initiative.“

This first project in Zambia will allow to make further developments in the future. The participants will be included within the Zambia Judo Association activities and therefore will find new opportunities to rebuild a new life. All of them have in mind the fantastic adventure of the refugee team which participated in the last Rio Olympic Games. They know that through sport and particularly through judo, they can achieve great things. A young representative of the refugee concluded: “The project has already brought a lot of changes in our lives. We are now united as refugees from different nationalities. We are socialising and able to speak to each other. With judo we could unite ourselves. We are making friends through the practice of judo and we are learning to respect one another.“ —- IJF