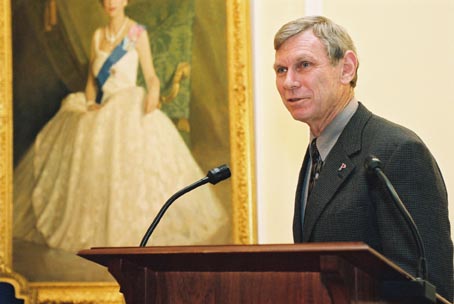 Monte-Carlo, August 04, 2012: New Zealand’s three-time Olympic champion and multiple World record breaker Peter Snell is the latest athletics legend to be named as one of the 24 inaugural Members of the IAAF Hall of Fame which has been created to mark the year of the IAAF Centenary.

The announcement of this honour comes on the occasion of a special dinner being held today (Sat 4 Aug) in Hamilton, New Zealand that marks the 125th Annual General Meeting of Athletics New Zealand and the federation’s foundation.

In Rome at the 1960 Olympic Games, Peter Snell took the 800m gold medal with a dramatic burst of speed over the final 30 metres, winning in an Olympic record of 1:46.3.

At the 1964 Tokyo Olympics, Snell produced a devastating burst of acceleration midway along the back straight on the final lap of both the 800m and 1500m finals to secure a remarkable middle distance double.

After his triumph in Tokyo, in November 1964, Snell reduced his Mile World record to 3:54.1 on home soil in Auckland.

“Athletics has a history entwined with the Olympic Games. Athletics’ greatest heroes and heroines are largely those of the Olympic Games too,” said IAAF President Lamine Diack, “and Peter Snell is among those gods of Olympia. The greatest ‘flying kiwi’ of them all, a three-time Olympic champion and multiple World Record breaker, Snell has rightfully earned his selection as one of the inaugural members of the IAAF Hall of Fame.”

Click here to read Snell’s profile in the Hall of Fame Members’ section of the IAAF website – http://www.iaaf.org/mini/hof/Members/Members.aspx – and to discover the other inaugural members who have so far been announced.

To mark the IAAF Centenary, a total of 24 athletes will become inaugural Members of the IAAF Hall of Fame in 2012, with the Official Induction Ceremony taking place at the IAAF Centenary Gala in Barcelona on Saturday 24 November 2012. —- IAAF/Image © insidethegames.biz