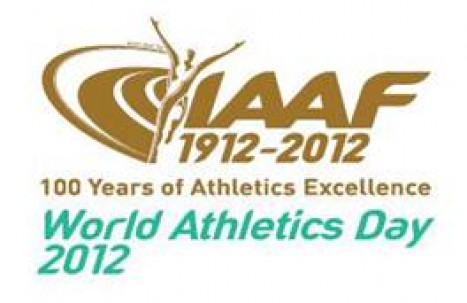 Monaco – July 17, 2012: IAAF Centenary, This evening H.S.H. Prince Albert and H.S.H. Princess Charlène welcomed a large delegation from the International Association of Athletics Federations (IAAF) to a private function within the Palace of Monaco to celebrate the Centenary Day of the IAAF.

Their Serene Highnesses greeted the IAAF party which was led by President Lamine Diack and his Vice-Presidents, and included representatives of the 17 founding Member Federations, and the staff of IAAF Headquarters, whose offices have been located in the Principality since October 1993.

To officially seal the day’s celebrations a special Monegasque commemorative postage stamp was unveiled during the reception with all guests receiving the gift of an official first day cover. The stamp issued today by the Principality is adorned by the IAAF Centenary logo and formally marks 100 years of the association’s history.

IAAF President Lamine Diack marked the historic occasion with the following words: “On behalf of the 212 Member Federations of the International Association of Athletics Federations I whole heartedly thank their Serene Highnesses for honouring the IAAF with this reception and of marking the 100 years of our existence with a postage stamp.”

“The IAAF was invited to move to Monaco by His Serene Highness Prince Rainier III, and since the association’s relocation to the Principality in 1993 we have been given the warmest of welcomes which has seen the IAAF prosper under the wing of the Palace. For all of this we greatly thank you.”

“The commemoration by Monaco of the IAAF’s birth, which took place one hundred years ago today is the latest of those kind gestures of friendship. The IAAF was born in Stockholm a matter of a few days after the close of the 1912 Olympics in Sweden and the very fact that both your Serene Highnesses are former Olympians, though in sports other than our own, makes us understand and appreciate evermore that our headquarters are situated in the most understanding of locations.” —– IAAF