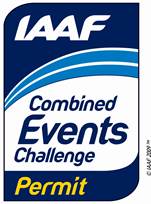 Monaco – April 26, 2013: The 16th edition of the IAAF Combined Events Challenge starts with in exactly a week and the first of 15 meetings which will decide this year’s men’s and women’s winners will be the famous Multistars – Trofeo Zerneri Acciai meeting, which this year will be in the Italian city of Firenze (Florence) on 2-3 May.

The Multistars meeting is one of five individual IAAF Permit meetings which are at the core of the Combined Events Challenge.

Challenge points can also be accumulated at a number of Area competitions, the US Championships, the Universiade (World Student Games), Mediterranean Games, Francophone Games and, of course, the IAAF World Championships in Moscow this coming August.

The Challenge rankings will be determined by the addition of the best three scores achieved by an athlete in any of the 15 competitions, and this determines who will get a share of over 200,000 USD in prize money when the season ends in Talence, France, on the weekend of 14-15 September.

The top eight athletes ranked in the men’s Decathlon and women’s Heptathlon will receive prize money, with the winner getting the handsome reward of 30,000 USD.

The big question is: who can dethrone Russia’s Tatyana Chernova after her victories in the Challenge for the last three years?

The 2011 IAAF World Championships gold medallist has been a model of season-long consistency since 2010 and will be bidding to become the second women to win the Challenge on four occasions, following Sweden’s Carolina Kluft who won from 2003-2006.

He has the chance to be the first man to retain his title since the Czech great Roman Sebrle won back-to-back Challenges in 2004 and 2005, two of his four wins.

However, it cannot be denied that all eyes will be on the London 2012 Olympic Games gold medallist and World record holder Ashton Eaton.

The American multi-events exponent has committed to competing at the renowned Hypo-Meeting in the Austrian city of Gotzis on 25-26 May and he also has the US Championships and IAAF World Championships in his diary.