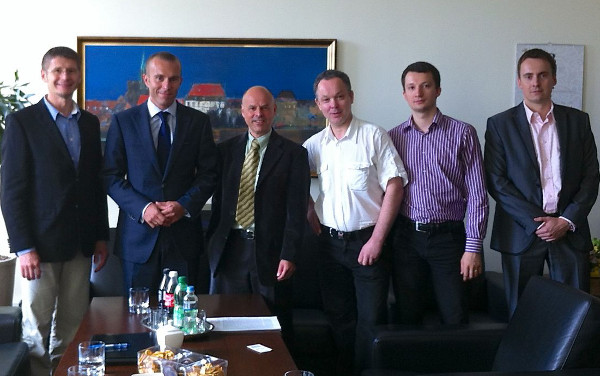 London, July 06, 2012: The World Squash Federation (WSF) has confirmed that the 2013 WSF World Junior Squash Championships have been awarded to the Polish city of Wroclaw. The decision follows an inspection of the proposed venue and hotel options by WSF Chief Executive Andrew Shelley.

The events will feature the World Individual Under-19 titles for both men and women (16-21 July), followed by the Women’s World Junior Team Championship (22-27 July).

Welcoming the allocation of the event to his city, Deputy Mayor Michal Janicki commented: “We can truly say that you will have a great welcome in Wroclaw and we look forward to meeting the world of squash in our city next year.

“Squash is becoming very popular and, as far as I know, the biggest facilities in any sport being built in the city are from squash,” he added.

The announcement – coming on the eve of the 2012 edition taking place in Doha, Qatar – sees the 2013 event being played at the Hasta La Vista Club, a new Wroclaw facility which is due to fully open next month.

Squash is already being played on its impressive twelve courts, which include a three-glass-wall ‘centre court’.

Owner Zenon Waniak explained that it was his love of squash that encouraged him to invest in the sport by building the centre. “It was a huge fondness for squash on one side and on the other side its very dynamic development in my country,” said Waniak.

Shelley underlined the expansion of the sport as he told the Deputy Mayor: “Poland is a great success story and is poised to become a European market leader in the sport in the coming years. To have the opportunity to bring a WSF World Championship to Wroclaw is only going to be the first of many, I am sure.

“The superlative facilities at Hasta La Vista, coupled with the plans to showcase squash by holding the finals on an all-glass show court in the city centre, make for something to really look forward to in a year’s time.”

The opportunity for Poland to host a world championship also delighted Polish Squash Federation President Tomasz Banasiak, who added: “We were privileged to host the European Individual Championships in 2011, and we are excited to take the step up to a world title next year as part of our strategic plan to grow squash as a perfect sporting activity in our country.”

These championships follow on from the city hosting matches in the European Football Championships and an announcement that Wroclaw will be the chosen host for the World Games 2017. —— WSF