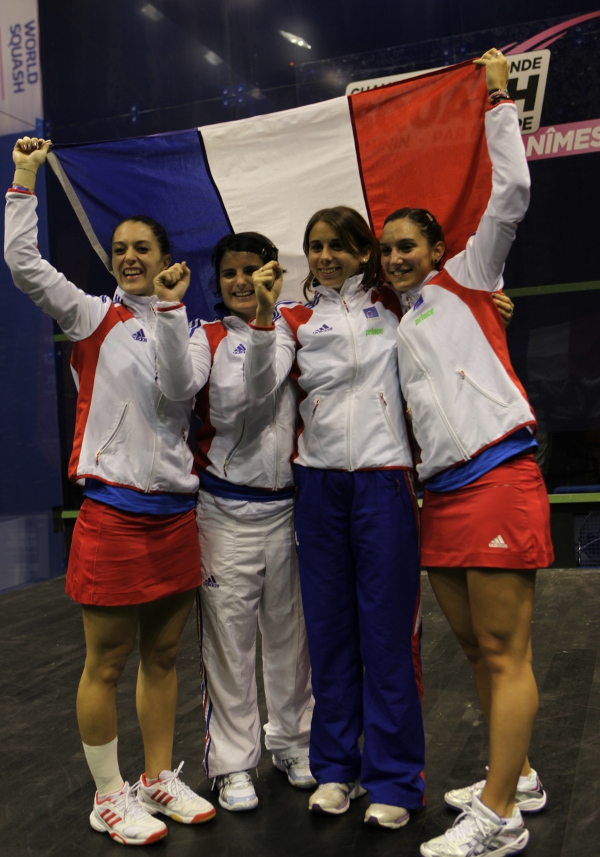 Nimes – France, Nov 14: World Championship pool, While Canada and Czech Republic secured places in the last 16 round of the 2012 WSF Women’s World Team Championship in Nimes tonight, it was hosts France who attracted the biggest crowd and rounded off the qualifying stages of the World Squash Federation event in the greatest style by beating Germany 3/0 to finish at the top of Pool H against expectations.

The ninth seeds made their breakthrough 24 hours earlier by overcoming significant rivals Netherlands, the No8 seeds.

And after Maud Duplomb and Coline Aumard gave the home team an insurmountable lead, the country’s number one and four-time French champion Camille Serme beat the top German Pamela Hathway 11-5, 11-6, 11-4 in 26 minutes to send the crowd home happy.

“It’s incredible,” said Serme, the world No14 from Paris. “I play all over the world so it’s great to play here in front of a home crowd for once. My parents are here, for instance, and that’s great.

“There’s a great spirit in the squad, and that’s why I think we’re doing well and can go far.

French national coach Philippe Signoret added: “Our success is also very good for the crowd and for the event.

“Beating the eighth seeds yesterday and then Germany 3/0 tonight is very good preparation for tomorrow – the girls are very confident.

“I was especially pleased with the way Coline played tonight, after her disappointing result yesterday,” added Signoret. “She has improved a lot recently – and has done extremely well considering that she had an appendix operation about a month ago. She’s extremely fit.”

Event debutantes Czech Republic, seeded 13, were the last side to make sure of qualifying after a hard-fought 3/0 win over Colombia. Second string Olga Ertlova had to fight back from 2/1 down to beat Colombian Catalina Pelaez to put victory beyond the reach of the 20th seeds.

In the draw for the last 16 round, favourites England will face neighbours Wales, and 2008 champions Egypt, the No2 seeds, will take on Mexico.

Third seeds Malaysia were drawn in England’s half of the draw, and will line up against Czech Republic, while fourth seeds Hong Kong will face South Africa.

All the last 16 round action will take place on the three all-glass show courts at La Parnasse Arena – and, for the first time in a world championship, simultaneous live streaming from all three courts will be available on www.youtube.com/worldsquashtv