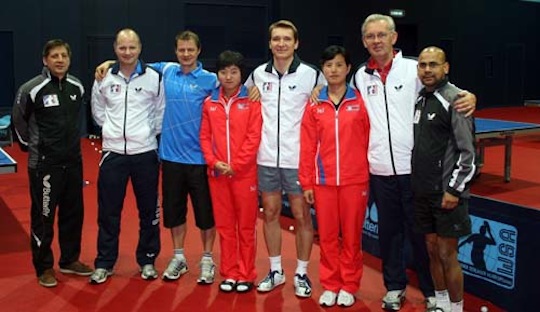 Lausanne, May 17, 2012: Unknown prior to the 2010 Youth Olympic Games in Singapore, where she attracted the attention of experienced eyes, KIM Song I from the Democratic People’s Republic of Korea, has arrived in the Austrian capital city of Vienna to attend an intense one month training programme at the prestigious Werner Schlager Academy.

The Academy based in Shwechat on the outskirts of Vienna is one of the International Table Tennis Federation’s major “Hot Spot” training centres; coaching with the full range of support activities taking place under expert eyes.

In addition to practicing at the Werner Schlager Academy, KIM Song I will compete in the ITTF Junior Circuit tournament in Senec, Slovak Republic, from Thursday 17th to Sunday 20th May and in the Euro Africa Satellite tournament, to be staged in the Swedish city of Helsingborg, from Thursday 7th to Sunday 10th June. KIM Song I is one of several young players who is benefiting from the “ITTF With the Future in Mind” project; a scheme promoted by the International Table Tennis Federation and organized with the support of the International Olympic Committee, National Olympic Committees and National Table Tennis Associations.

There are three main goals for the specially selected players concerned, many from countries with limited resources to promote elite athletes.

In the first place for one group the target is the London 2012 Olympic Games, the second group is focused on the Under 21 age group with the third group having the 2014 Youth Olympic Games in mind.

In addition to the Werner Schlager Academy, Bronby (Denmark), Budapest (Hungary), Kping and Falkenberg (Sweden) plus INSEP in Paris (France) are the “Hot Spot” Training Centres where the project will be administered.