By Tom Lloyd, La Jolla, California, Feb 9, 2017: The International Surfing Association (ISA) is pleased to announce that the 2017 VISSLA ISA World Junior Surfing Championship will gather Surfing’s top 18 and under surfers to represent their nations and compete for Gold from September 23 to October 1 in Japan. The event will take place at the superb break of Okuragahama beach in Hyuga City on Japan’s southern island of Kyushu. 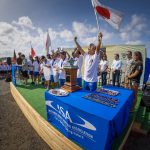 VISSLA, an innovative surf lifestyle brand, has committed to continue their role as Title Sponsor of the event, maintaining their strong, four-year support of the ISA and Surfing’s youth that started at the 2014 VISSLA ISA World Junior Surfing Championship in Ecuador.

The announcement comes on the back of the International Olympic Committee’s decision in August of 2016 to include Surfing in the Tokyo 2020 Olympic Games. With Surfing’s rapidly growing popularity and strong youth appeal in Japan, the VISSLA ISA World Junior Surfing Championship will set a precedent of world-class Surfing that fans can expect to witness when the sport makes its Olympic debut at Chiba’s Shidashita beach in the 2020 Games.

The VISSLA ISA World Junior Surfing Championship is the largest junior Surfing contest in the world, with the 2016 edition in the Azores breaking participation records for the second consecutive year, with 371 athletes from 39 countries.

The event has proven to provide a glimpse of the future stars of the sport ever since legendary surfer Tom Curren won the Gold Medal at the inaugural edition in 1980. Other top professional surfers have launched their careers with ISA Junior Gold Medals include Gabriel Medina, Julian Wilson, Jordy Smith, Filipe Toledo, Owen Wright, Leonardo Fioravanti, Stephanie Gilmore, Sally Fitzgibbons, Laura Enever, Tatiana Weston-Webb and Tyler Wright. The 2017 edition of the event in Japan will define the future stars of Surfing, those that could potentially be the first surfers to represent their nations in the Olympic Games.

Taking place in Hyuga City, located in the Miyazaki prefecture of Kyushu Island, the 2017 ISA Juniors will be the first ISA event held in Japan since the 1990 World Surfing Games were held in Japan’s Chiba peninsula. Hyuga City’s Okuragahama beach offers quality waves year-round and will provide ample opportunity for the world’s best Surfing youth to display their talent in world-class competition.

The host Team of Japan will be looking to build on their historic performance at the 2016 VISSLA ISA World Junior Surfing Championship in the Azores Islands of Portugal. Team Japan claimed the Copper Medal, which was their first team medal in the history of the event and evidence of the growing popularity and development of Surfing among Japanese youth.

“Bringing the world’s best junior surfers to Japan for the first time in over 25 years is an exciting development for our sport globally. It’s also an important affirmation of the growth and popularity of Surfing in Japan following the decision to include Surfing in the Tokyo 2020 Olympic Games.

“Japan has also shown great promise from a competitive point of view, producing many top surfers that are performing well at an international level. The outstanding Team Copper Medal performance by their junior surfers at the ISA Worlds in 2016 is a testimony to their dynamic progress.

“I am looking forward to seeing who will rise above the rest and claim their stake as the best junior surfers in the world. These very well could be the same athletes standing atop the podium in three years at the Tokyo 2020 Games.”

“We are extremely excited to continue to be a part of the VISSLA ISA World Junior Surfing Championship. The progressive Surfing and innovative attitude of the competitors that we have witnessed over the past three years of the event aligns perfectly with our brand and we are looking forward to seeing what the youth of Surfing has in store for 2017. The incredible scenery and solid waves of Japan will provide the perfect stage for these athletes perform and work their way towards becoming the first Olympic surfers.” —- ISA