By Robert Fawdon, The Azores Islands, Portugal, Sept 19, 2016: The International Surfing Association (ISA) has announced today that Biarritz, France will host the 2017 ISA World Surfing Games, bringing the competition to Europe for the first time since 2008 when it was held in Costa da Caparica, Portugal. 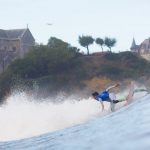 In May of 2017, the world’s best National Surfing Teams will come together to compete for Gold in the ISA’s flagship event in the world-renowned surf destination of Biarritz, located on France’s southwest coast.

The announcement comes on the back of the 2016 INS ISA World Surfing Games, which took place from August 6-14 in Playa Jacó, Costa Rica. The event was one of the most successful editions ever, as hundreds of thousands of spectators came to see the 142 surfers from 26 countries during an exhilarating week of competition. Team Peru emerged victorious.

The ISA World Surfing Games were last held in Biarritz in 1980, where legendary surfer, Tom Curren, from USA, launched his successful career by taking the Gold Medal in the Junior Division. Since 2003, the Junior Division has become a separate competition, the VISSLA ISA World Junior Surfing Championship.

“I’m very happy to see the return of our flagship event back to Europe. France is a great surfing destination and Biarritz in particular, is a wonderful coastal city transformed by surfing in the last decades. We are excited to be partnering with the French Surfing Federation for this extremely important event and to grow and promote surfing in Europe. The best surfers in the world will be participating as members of their official National Surfing Teams. The world-class waves of Biarritz will be a perfect place to showcase our sport on the road to Tokyo 2020.

“With athletes competing for the pride of representing their nations in true Olympic spirit, the ISA World Surfing Games are a glimpse into the future of Olympic Surfing that we will witness at Tokyo 2020.”

“The ISA World Surfing Games are an excellent platform to display the world-class waves and beauty of France’s southwest coastline. We are looking forward to welcoming the visiting National Teams to experience the waves, the Surfing culture and hospitality that our country has to offer.

“With Tokyo 2020 on the horizon these are exciting times for Surfing. We look forward to welcoming some of the best surfers in the world and potentially the sport’s first ever Olympians at what will be a wonderful festival of Surfing.”