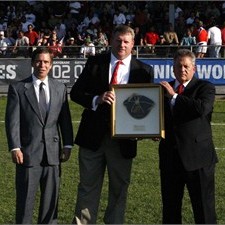 Dublin – Ireland, June 30, 2012: In a move that will help to deepen the ties between Rugby and the rest of the Olympic family, the International Rugby Board has inducted the ground-breaking USA Olympic Rugby teams from the 1920 and 1924 Olympic Games into the IRB Hall of Fame.

Comprising players selected mainly from Californian universities and funded by the Olympic Club of San Francisco, the USA Olympic team won gold at successive Olympic Games in Antwerp (1920) and Paris (1924). The induction is in recognition of the pioneering feats in the development and promotion of the Game in the United States.

The USA teams become the 53rd inductee into the prestigious IRB Hall of Fame. USA remains the reigning Olympic Games Rugby champion and will have the chance to defend its title, albeit in Sevens, not Fifteens, at the Rio de Janeiro Olympic Games in 2016.

Latham said: “This is a wonderful occasion for USA Rugby. We are deeply appreciative of the IRB’s action in inducting those gold medal-winning United States teams into the IRB Hall of Fame, an honour the players on those teams deserve and of which their families can be proud.”

While it is perhaps a little-known fact that the USA is the reigning Olympic Rugby champion, the story of their rise to gold is fascinating. With Rugby having been played competitively for a handful of years in the States by the time of the 1920 Olympic Games, the US Olympic Committee decided to hand over the organisation and selection of the team to the California Rugby Union, with the players being selected mainly from Californian Universities, though a few came from the Olympic Club of San Francisco.

Coached by 1908 Australia Olympic Rugby Champion Daniel Carroll, who happened to be studying geology at Stanford University at the time, the USA upset the odds by defeating France 8-0 in the one and only match of the 1920 Olympic Rugby event.

The team for the 1924 Games contained only four of the gold-medal winning side from four years prior. In the opening match USA overwhelmed Romania 37-0 before setting up another final appearance against a much-fancied France side. Again, though, it was the students who prevailed, winning 17-3.

The ties with those pioneering teams are strong to this day. There is little doubt that the class of 1920 and 1924 played a significant role in the growth of Rugby in a country that now boasts over 450,000 recreational and registered players.

Indeed, further recognition of the feats of the USA Olympians was today recognised with the signing of a proclamation by USA Rugby to award caps to the players who featured in those Olympic matches.

The IRB Hall of Fame honours Rugby greats who have enhanced the Game through their exceptional achievements. Players, entire teams, administrators, coaches, referees, members of the media and Rugby personalities are considered based on their outstanding contributions.