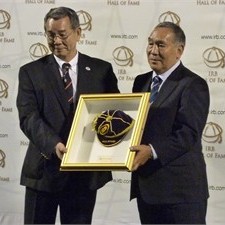 Dublin-Ireland, June 05, 2012: The International Rugby Board has inducted Demi Sakata, one of the world’s best players of the 1960s and perhaps Japan’s finest to date, into the IRB Hall of Fame.

IRB Council Member and Chairman of JRFU Yabe Tatsuzo presented the commemorative cap and gold pin to Sakata at a special induction ceremony during the half-time interval of the Japan v Fiji Pacific Nations Cup match in Nagoya on Tuesday. Sakata becomes the 51st inductee into the prestigious IRB Hall of Fame.

Yoshihiro “Demi” Sakata was born in 1942 and started playing rugby at secondary school before going on to play for Doshisha University, at the time the leading rugby nursery in Japan. In 1967, in his second year at university, he won the first of his 16 caps for Japan.

A left-wing of real pace and tenacity, he became a regular feature in the Japan team at the end of the 1960s and scored 13 tries in an international career that lasted six years. Indeed, four of those scores came in a memorable international against the Junior All Blacks in 1968.

In 1969, he was voted as one of the five best players in the world (together with Jo Maso and Walter Spanghero of France and Sid Going and Wayne Cottrell of New Zealand) by the New Zealand Rugby Almanac and was invited to play for Canterbury in NZ the following season.

During that season he was selected for NZ Universities and also played for NZ Barbarians. He retired from the national team in 1973 and carried on as coach of Osaka University of Health and Sport Sciences, where he remains a professor in the department of Sport Education. He is an academic in the research fields of Rugby coaching, international competitive theory for sport and physical education, and artificial turf for Rugby.

On his induction, Sakata said: “It is indeed a great honour to receive recognition from the International Rugby Board and to be inducted into the IRB’s prestigious Hall of Fame. I would like to take this opportunity to offer my sincere gratitude to all those members who have deemed my career and my contribution to Rugby as worthy of such a wonderful honour.

“When I first heard that I was to be honoured in this way, I couldn’t quite believe it and it still hasn’t really sunk in. My induction into the Hall of Fame not only recognises my achievements but also the great work of the Japan Rugby Football Union and the Japanese Rugby family for their dedication to the sport over many, many years.”

Yabe praised Sakata for his achievements on and off the field. He said: “It is a great honour for the entire Japanese Rugby family that Mr Sakata has been inducted into the IRB Hall of Fame. He played for his country with passion and pride. Then, as a coach, he devoted his life to the development of young players. He has now become president of the Kansai Rugby Union, one of three regional unions in Japan. His experience and never-ending passion for rugby will definitely help us in this very important period of time leading to Rugby World Cup 2019 in Japan.”

About the IRB Hall of Fame: The IRB Hall of Fame honours Rugby greats who have enhanced the Game through their exceptional achievements. Players, entire teams, administrators, coaches, referees, members of the media and Rugby personalities are considered based on their outstanding contributions.