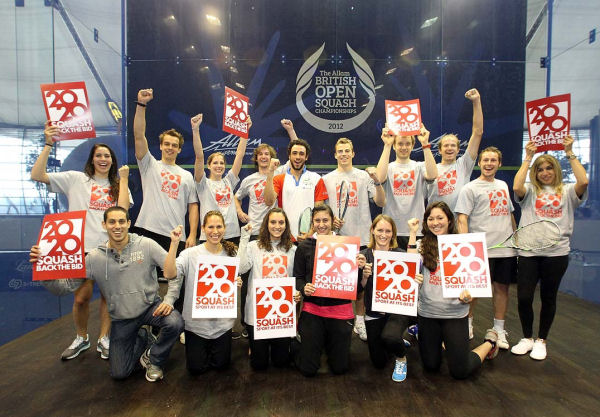 16 players took time out from the Allam British Open which is taking place this week at the 02 – one of the venues for the London 2012 Olympic and Paralympic Games – to back the inclusion of Squash in the Olympic Games from 2020.

Nicol David, the record six times world champion from Malaysia who has topped the women’s rankings since August 2006, said: “It’s the missing link in the Olympic Games. Squash has every element of what a true Olympic sport should be. It would be amazing if we were there with all the other racket sports – we have so much to offer the Olympic programme.”

James Willstrop, the world number one from England, said: “Squash is the ultimate Olympic sport – it’s what sport should be. We’ve got everything; it’s physical, mental, tactical – and psychological. Every base has to be covered. It’s a true all-round challenge. The sport is also well-established around the world with flourishing men’s and women’s tours.”

Dipika Pallikal, the 20-year-old world No14 from Chennai who led India to its first Asian title last month, added: “Squash is a really demanding sport and its top players are amongst the fittest in any sport. The sport can be staged at iconic venues around the world – like here at the famous O2 Arena in London. We would fit perfectly into the Olympic Games.”

World Squash Federation President N Ramachandran was delighted with the unanimous show of support: “It’s fantastic that our leading players are so passionate about getting Squash into the Olympic Games. Their support is an important element to our campaign as we head into a crucial 12 months that will see us present to the IOC Programme Commission and Executive Board and explain what the benefits to the Olympic Movement would be if Squash becomes part of the Sports programme for the 2020 Games.”

In July 2011 the International Olympic Committee agreed on a shortlist of sports that will be considered for inclusion in the sports programme of the 2020 Olympiad. The sports are: baseball, karate, roller sports, softball, sports climbing, squash, wakeboard and wushu, one of which could be added to the 2020 sports programme to be voted on by the 125th IOC Session in Buenos Aires in 2013.