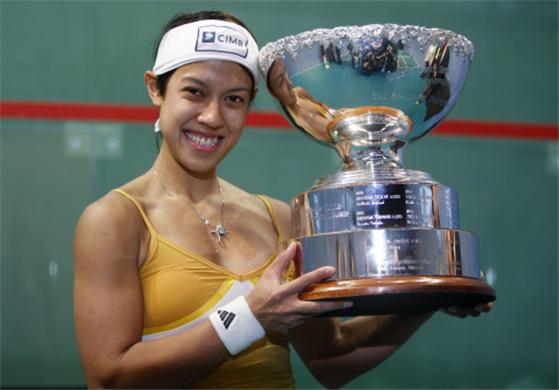 Malaysia’s record six-time world squash champion Nicol David will lead this year’s WSF Ambassador Programme visit to Malawi and Namibia, from 7-13 June, accompanied by Egypt’s former world junior champion Mohamed El Shorbagy. The Ambassador Programme international promotional initiative was launched by the World Squash Federation last year – taking two of the world’s leading players, plus an international coach and referee to Latvia to highlight the appeal of Squash to the public and media in the Baltic country.

While the players integrated with the local squash community, providing clinics and exhibition matches in the capital Riga, coaching and refereeing workshops attracted interested parties both from Latvia and neighbouring countries. The 2012 WSF Ambassador Programme will visit Lilongwe, the capital and largest city of Malawi, before moving onto the Republic of Namibia capital Windhoek.

In Lilongwe, the players will be joined by South Africa national coach Richard Castle and World referee Mike Collins, also from South Africa, who will conduct two-day coaching and refereeing workshops respectively for attendees who are likely to attend from several countries across southern Africa.

Jimmy Kawaye, President of Squash Malawi, anticipates a variety of benefits from the visit: “It will generate a number of positive developments, such as inspiring young players to choosing the sport of squash; motivating the senior players into competitive squash; improving the coaching and refereeing skills for the country; increasing awareness of the developmental effect the sport of squash; generating interest from the corporate world to provide funding for tournaments; and increasing funding from the National Sports Council and Malawi Olympic Committee for supporting the youth development programme.”

Namibian Squash Association (NSA) Chairperson Adri Lambert is equally upbeat about the forthcoming visit: “The opportunity to host ambassadors from the World Squash Federation (WSF) will be a great honour for the Namibian Squash Association. Squash in Namibia is experiencing unprecedented growth and with the proposed visit from such esteemed squash personalities, it will further boost the sport in the country.

“There is a lot of excitement regarding the proposed WSF ambassadors visit and this is a sure way to generate public interest in our sport locally. It will be the first time Namibia gets an opportunity to host WSF officials and we are looking forward to it.”

WSF CEO Andrew Shelley added: “Squash in Africa is a success story, and with the wonderful support from the players and instructors we can play our part, alongside the work of the national federations, in offering a little stimulus with the visit. For the players to meet the media as well as the squash communities, and for the coaching and referee fraternities to have the opportunity to learn and disseminate information and ideas – that is what these visits are all about, and we look forward to this next Ambassadors visit with great relish.”

Mohamed El Shorbagy successfully defended his World Junior Championship title in 2009 – becoming only the second man in history to win the title twice. Currently the youngest player in the world top 30, the 21-year-old from Alexandria burst into the senior world top 20 just a year after his world junior triumph, and marched on to celebrate a career-high world No6 ranking at the beginning of this year.