Baku, Nov 26, 2016: Perurena, Jose Perurena’s (ESP) leadership of the International Canoe Federation will continue for a third term following a vote of confidence at the XXXVI ICF Congress in Baku, Azerbijan. 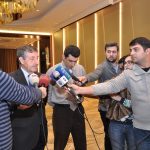 The Spaniard, who stood unopposed, spoke passionately about his vision for the future of the sport and demonstrated his ability to deliver organisational change with his proposed new governance structure gaining the backing of his peers.

“I have been involved in canoeing for my whole life and it’s a great honour to be chosen to lead this sport through the next Olympic cycle as we move towards Tokyo 2020,” said Perurena.

“This Congress has shown that our sport is in good hands and that administration is open minded and keen to progress.

“I was pleased that at Thursday’s Extraordinary Congress we gained support for our new governance structure.

“This provides a clear message that, as a sport, we are ready for future and now [Continental Presidents added to the Executive Committee] have guaranteed global representations within our executive committee.

“As a Congress we have put forward several motions to increase gender equality both on and off the water, this point was underlined here in Azerbaijan with an exact 50:50 split of candidates for the three vice-president positions and under the new structure we are guaranteed that both genders will be represented.

The president continued, “I would also like to say a big thank you to the Azerbaijan Canoe Federation that have worked tirelessly to ensure a successful event.”

Luciano Buonfiglio retained his position as the ICF treasurer after being re-elected ahead of Australia’s Danielle Woodward and Denmark’s Christian Jakobsen.

Frank Garner remains the chair of the ICF Canoe Sprint Committee, with the Canadian being re-elected ahead of Miroslav Haviar of Slovakia, Hungary’s Istvan Vaskuti and Russia’s Nikolay Mordvin.

Croatia’s Tomislav Crnkovic was elected unopposed as chair of the Wildwater Committee, replacing Germany’s Jens Perlwitz in the post.

France’s Jean-Michel Prono and Denmark’s Jorn Cronberg, the Canoe Slalom and Marathon Committee chairs, were unopposed for re-election in their positions.

Rundown of elected positions at the XXXVI ICF Congress in Baku, Azerbijan.