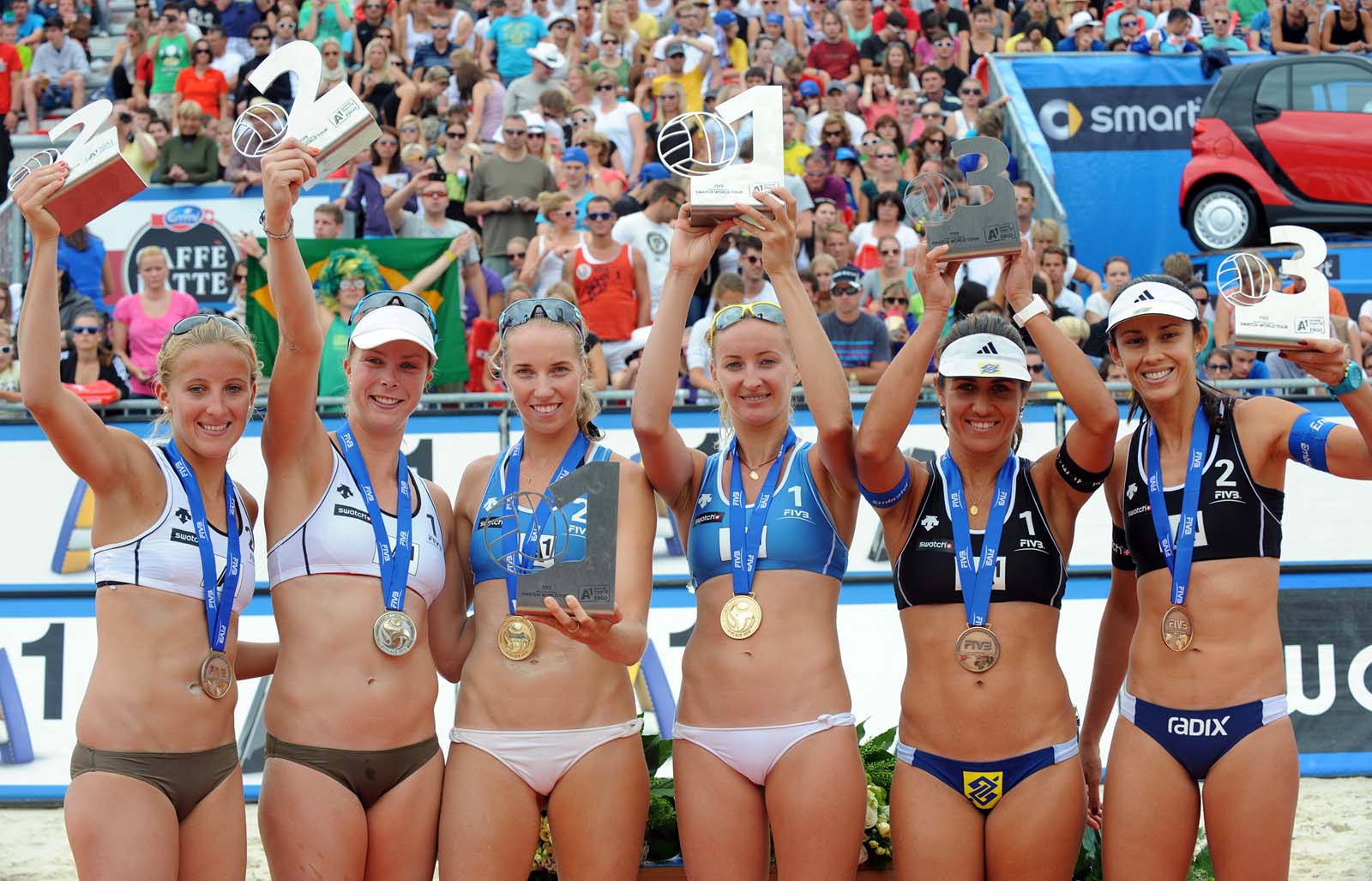 After enduring the first time in the 16-year history of the A1 Grand Slam in Klagenfurt that the stadium center court had to closed during the tournament, Russia’s 28th-seeded qualifying team Khomyakova/Ukolova defeated another first-time final four team in Netherland’s 13th-seeded Madelein Meppelink/Sophie van Gestel, 21-13, 25-27 and 15-10 in a 54-minute gold medal finale played just prior to the men’s gold medal match. It was the first medal match appearance for either team in their young careers on the FIVB SWATCH World Tour.

Russia’s Khomyakova, 24, and Ukolova, 23 are 21-15 on the world tour this year, including a 5-1 record in qualification tournament. They have played in just 18th FIVB SWATCH World Tour events together earning their first medal and their first final four appearance.

Netherlands’ youthful Meppelink, 22 and van Gestel, 21, played just their 11th FIVB SWATCH World Tour event together as this was their first medal and first final four appearance as they have only been playing together as a team since this event in Klagenfurt last year. Netherlands’ Meppelink/van Gestel are 30-13 overall which includes a 9-0 record in qualification tournaments. Just last September, van Gestel won a bronze medal with Remke Braakman in the 2011 FIVB SWATCH Junior World Championships for players under 21.

In their young careers, Netherlands’ Meppelink/van Gestel and Russia’s Khomyakova/Ukolova have now met three times with Russia increasing their lead to a 3-0 edge in the series.

Russia’s Khomyakova/Ukolova qualified for the upcoming Olympic Games by winning the CEV Continental Cup Final in Moscow four weeks ago Netherlands’ Meppelin/van Gestel qualified for next week’s 2012 London Olympic Games by virtue of her country placing in the top two of the FIVB World Cup Olympic Qualification Tournament in Moscow three weeks ago. Their victory in Klagenfurt represents the first gold medal by a Russian women’s team in the history of the FIVB SWATCH World Tour.

The seventh of an FIVB-record eight grand slams on the 2012 FIVB Beach Volleyball SWATCH World Tour schedule, the A1 Grand Slam began with women’s country quota matches this past Monday and concluded Sunday with both the internationally-televised women and men’s semifinals and medal matches. One of the most popular events of many ‘favorite’ events on the FIVB SWATCH World Tour, the Klagenfurt venue featured a purpose-built 8,000-seat stadium center court and massive two-story VIP hospitality area and private dock along with another private players dock alongside the shore of spectacularly beautiful Lake Woerth in western Klagenfurt, which is located in Southern Austria.

For Sunday’s women’s and men’s semifinals and medal matches the winning pairs in each gender share the $43,500 first-place prizes. The men’s schedule has mirrored the women, starting one day later with country quota matches on Tuesday. Silver medalists will split $29,500 while bronze medal winners will divide $23,000 and the fourth place finishing teams in each gender will receive $18,400.

Because of the semifinal forfeit by China’s top-seed Chen Xue/Xi Zhang, Netherland’s Meppelink/van Gestel passed through to the gold medal match and Brazil’s fifth-seeded Maria Antonelli/Talita Antunes duo was awarded the bronze medal after their semifinal loss to Russia’s Khomyakova/Ukolova for the same reason.

“We have been preparing all year to win the CEV Continental Cup Finals so we could go to the Olympics because we knew it would be a better way for us to make it and we did it even though we have played some on the FIVB SWATCH World Tour,” said Russia’s Ukolova after their gold win. “Against the Brazilians in the semifinals and the Dutch in the gold medal match, we just played our game, didn’t quit and things worked out for us to beat a very, very good Brazilian team and then come back against another young team and win the gold medal match as well. It’s unbelievable and gives us so much confidence heading to London.”

Russia’s Khomyakova/Ukolova also credited much of their rapid development to the newest member of their team, Italy’s Fabrizio Magi physical trainer and assistant coach who joined the team for this season.

After dominating the first set in the gold medal match, Russia’s Khomyakova/Ukolova were caught a little off guard in the close second set, missing three match point opportunity before losing the set 25-27. In the third and deciding tie-breaker, Russia’s Khomyakova/Ukolova came out smoking again and dominated again to win the set and the match, 15-10.

In the women’s semifinal that was played Sunday, Russia’s Khomyakova/Ukolova, who qualified for this year’s Olympic Games by winning the CEV Continental Cup Final, upset Brazil’s Antonelli/Antunes for the second time in this tournament, slipping by in two close sets, 21-19 and 24-22 in 45 minutes. In the deciding second set, Russia’s Khomyakova/Ukolova were down 14-16, but came back to score three straight points and take a 17-16 lead and then held off every challenge by Brazil’s Antonelli/Antunes for the overtime set win to secure the match victory for them.

Following just the third meeting between the two teams on the FIVB SWATCH World Tour, Russia’s Khomyakova/Ukolova now have a 2-1 series edge over Brazil’s Antonelli/Antunes after also beating the Brazilians in pool play on Wednesday in three sets.

The 2012 calendar features 13 women’s and 12 men’s events, including nine double-gender tournaments, within four of the five FIVB confederations in addition to the approaching 2012 London Olympic Games on July 28 to August 9 in a purpose-built 15,000 stadium on the grounds of the iconic Horse Guards Parade. The 2012 FIVB SWATCH World Tour is offering $6,110-million in prize money.

After the upcoming 2012 London Olympic Games, the 2012 FIVB Swatch World Tour returns to action with the eighth and final grand slam double-gender event August 13-19 with the Mazury Orlen Grand Slam in Stare Jablonki, Poland. The total prize money for each Grand Slam event is $600,000.

Also on-site at the Klagenfurt venue was a special production crew from IMG, the company that not only produces the live international telecasts of the medal matches, but also the weekly FIVB SWATCH World Tour highlight show that is syndicated throughout the world.