Jacques Fontaine becomes the Federation’s ninth President since the WSF’s inception in 1967 – the first Frenchman and third European – and was elected by delegates representing a record-breaking 59 National Federations attending the 46th WSF AGM in Hong Kong.

“My intention will be to work with a new governance model based on integrity, transparency and team spirit,” said Fontaine after his victory. “The WSF needs to establish a defined agreement with the professional section of our discipline, the PSA.

“The Olympic agenda remains a priority, along with increasing the profile of our sport worldwide and supporting grassroots development,” added the new President. “Collaboration of all Member Nations is a must.”

“They bring a tremendous skill set, global representation and an unparalleled commitment,” said President Fontaine, delighted by the candidates on his newly-elected board. “I am confident this will be the beginning of a new era for squash.”
Pictured below (L to R) are Gar Holohan, Huang Ying How, Jacques Fontaine and Pablo Serna (absent is Sarah Fitz-Gerald, who was unable to attend the meeting in Hong Kong). 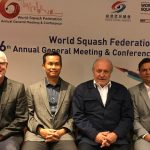 Fontaine, President of the French Squash Federation and European Regional Vice President as well as being a Board Member of the French National Olympic Committee, was elected ahead of three other candidates – Natalie Grainger, a former world number one from the USA who recently won the World Over-35 title; Egyptian Mohamed El Menshawy, a WSF Vice President for six years; and Zena Wooldridge, President of the European Squash Federation, from England.

The outgoing President was characterised by his efforts to secure a place for squash on the Olympic Games 2020 Programme – a bid which was ultimately unsuccessful.

“I want to say what an honour I feel in my heart to have had the opportunity to serve our Member Nations and the sport for the last eight years as your President,” said Ramachandran, from Chennai, who became WSF President in 2008, having previously been President of the Asian Regional Federation.

“I have had the privilege of not only having good teams behind me, but so much support from so many people generally. I leave feeling that I have taken WSF forward.”

The meeting also unanimously approved the application of Tahiti as the newest WSF member.

The incoming Board was delighted that squash legend Jahangir Khan agreed to serve a further term as Emeritus President of the WSF. —- WSF