Home  »  OTHER SPORTS   »   Cape Town/Helsinki calling! Gymnastics for All 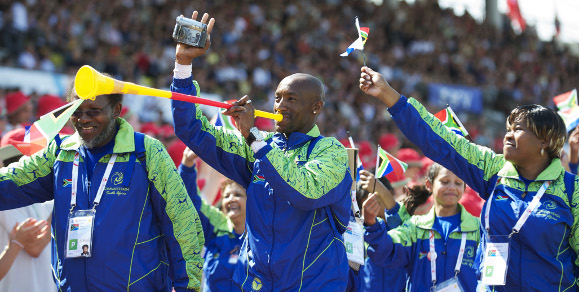 Lausanne (SUI), July 16, 2012: Gymnasts from every corner of the FIG global family have now been sent their invitations to take part in the 2nd World Gym For Life Challenge and the 15th World Gymnaestrada, which are being staged in Cape Town (RSA) and Helsinki (FIN) respectively. In South Africa and Finland the organisers are already hard at work, as is the FIG Gymnastics For All Committee, chaired by Sweden’s Margaret Sikkens Ahlquist, with everyone determined to ensure the success of grassroots gymnastics’ two biggest events of the next four-year cycle.

In the case of Cape Town, it is worth noting that this will be the first time that a Gymnastics for All event will take place outside Europe.

“This is something that I’ve hoped to see for a long time, and I’m both happy and proud to invite the entire Gymnastics for All community to come to South Africa,” said Sikkens Ahlquist.

The South African Gymnastics Federation, headed by Jerry Masia, delivered an impressive proposal to the FIG Council in Chiba (JPN) back in 2010, and convinced it to entrust the second edition of the World Gym For Life Challenge to Cape Town. It was a success that was celebrated to the distinctive sounds of the vuvuzela!

The competitions and the gala will take place at the International Convention Centre in the centre of Cape Town on July 10-13, 2013. Just as for the first edition, which took place in Dornbirn (AUT) in 2009, a huge number of different delegations are expected to take part. In Austria there were 77 teams and some 2,000 individual gymnasts, all of whom will be keen to relive the experience in Cape Town next year, with dreams of lifting the Grandi Trophy, currently held by the GC Piruett Elite Group from Tallinn (EST).

On July 12-18, 2015, the same gymnasts will be resetting their compasses to north, as they head for the 15th World Gymnaestrada in the Finnish capital of Helsinki. In a way, this represents a return to the roots of the Gymnastics for All movement, given the long traditions of grassroots gymnastics in Finland, which boasts a remarkable 400 official clubs and 130,000 registered gymnasts! No less impressively, the Finns have sent huge contingents to the event every four years since it was first launched in Rotterdam (NED) back in 1953; their delegation for the last edition, in Lausanne (SUI) in 2011 comprised no less than 1,300 gymnasts!

“This is a dream come true for all of us, the organisers, the gymnasts and the volunteers,” enthused Anne Martikainen, the President of the Finnish Gymnastics Federation. Finland won the right to stage the event in the face of stiff competition, seeing off bids from Spain (Maspalomas), Norway (Lillestrom) and Sweden (Gothenburg) at the 2010 FIG Council in Chiba.

Having staged the Olympic Games back in 1952, Helsinki has long since boasted the kind of infrastructure needed to host an event on the scale and magnitude of the World Gymnaestrada, which is likely to see more than 20,000 gymnasts converge on the city. It is an event that will involve not just the capital city, but the whole of Finland, with the Ministry of Education & Culture providing active support, and Tarja Halonen, the former President of Finland (2000-2012) agreeing to chair the Support Committee for the World Gymnaestrada. —– FIG

View all posts by: Abdul Rahim
4 Responses to “Cape Town/Helsinki calling! Gymnastics for All”