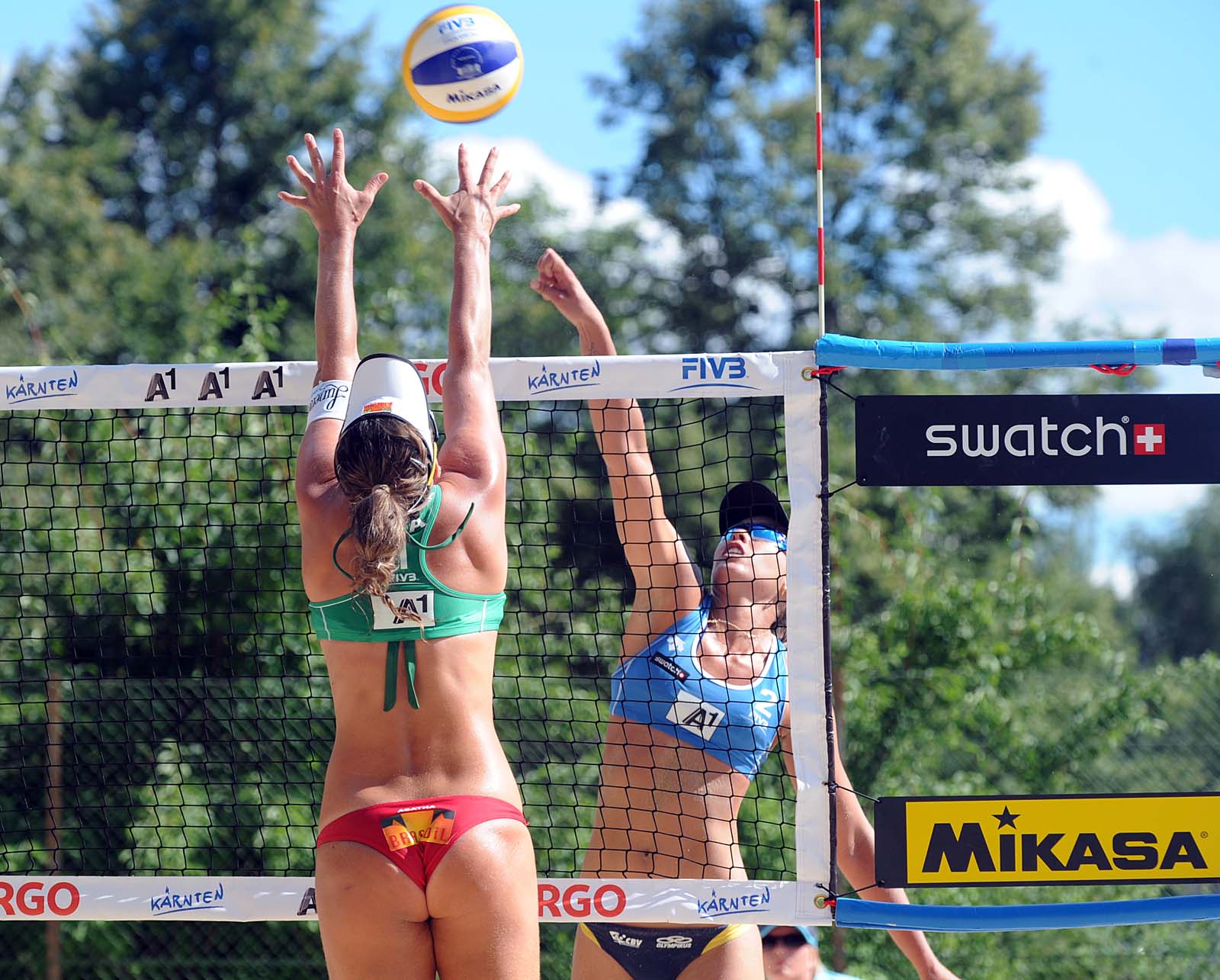 Gstaad, Switzerland, July 16, 2012: Returning to Austria for one of the one of the singular most popular events held annually on the 2012 FIVB Beach Volleyball SWATCH World Tour which began its next round Monday in Klagenfurt am Wörthersee with two teams Germany and one from Brazil advancing from country quota playoff matches to Tuesday’s women’s qualification tournament at the double-gender $600,000 A1 Grand Slam presented by ERGO. The world’s top beach volleyball tandems have returned to Austria as the double-gender event marks the 16th consecutive visit by the world tour with Klagenfurt hosting 15 men’s and 11 previous women’s events.

Advancing for Germany were Melanie Gernert/Anja Gunther and Jana Kohler/Anni Schumacher while advancing to play in Tuesday’s qualification tournament from Brazil was the duo of Liliane Maestrini/Angela Vieira.

The seventh of an FIVB-record eight grand slams on the 2012 FIVB Beach Volleyball SWATCH World Tour schedule, the A1 Grand Slam began with women’s country quota matches on Monday continues with the single elimination qualification tournament on Tuesday to determine the final eight spots in the 32-team main draw pool play on Wednesday and Thursday and single-elimination bracket Thursday afternoon through Friday. The women’s semifinals and medal matches will be played Saturday with the men’s “final four” matches Sunday as the winning pairs in each gender share the $43,500 first-place prizes. The men’s schedule mirrors the women, starting one day later with country quota matches on Tuesday.

Gunther commented after her team’s playoff match win, “These are actually some of the toughest matches in the entire tournament just to get into the qualifier, but we didn’t and we hope we continue to play at this level to go as far as possible in this great tournament in Klagenfurt.”

Advancing for Brazil was the team Liliane Maestrini/Angela Vieira who defeatedBrazil’s Agatha Bednarczuk/Barbara Seixas, 21-16, 21-18 in 40 minutes. To make it to the advancement match for Brazil, Bednarczuk/Seixas eliminated compatriots Vanilda Leao/Maria Clara Salgado, 21-15, 21-19 in 37 minutes in the first Brazilian country quota playoff match of the day.

An obviously elated Vieira, who with Maestrini won last Augusts’ women’s London Olympic test event, commented, “We seem to have these battles against the other Brazilian teams nearly every tour stop but this sport is so big in our country and our Brazilian federation is so supportive and the process does help us all become better teams because we travel together, practice together and play this country quota playoff matches and today we were fortunate enough to win. Now we will play some times we haven’t played as much and push to make it into the main draw.”

The talented field includes the three of the final four finishers in the women’s competition from last year and all four of the men’s final four from last year’s A1 Grand Slam in Klagenfurt. Returning from last year’s women’s competition are China’s silver medalists Chen Xue/Xi Zhang, Netherland’s bronze medalists Sanne Keizer/Marleen Van Iersel and Brazil’s Maria Antonelli/Talita Antunes who finished fourth last year for the third consecutive year. Brazil’s reigning FIVB SWATCH World Champions Juliana Felisberta Silva/Larissa Franca are entered this year in Klagenfurt as well where they won the gold medal in both 2009 and 2010 and the silver in 2006.

The 2012 calendar features 13 women’s and 12 men’s events, including nine double-gender tournaments, within four of the five FIVB confederations in addition to the approaching 2012 London Olympic Games on July 28 to August 9 in a purpose-built 15,000 stadium on the grounds of the iconic Horse Guards Parade. The 2012 FIVB SWATCH World Tour is offering $6.02-million in prize money.

After the 2012 London Olympic Games, the 2012 FIVB Swatch World Tour returns to action with the eighth and final grand slam double-gender event August 13-19 with the Mazury Orlen Grand Slam in Stare Jablonki, Poland. The total prize money for each Grand Slam event is $600,000.