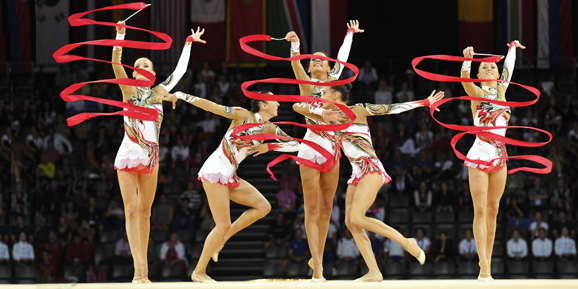 LAUSANNE (SUI), April 11, 2012: Second in a series of seven events, the FIG Rhythmic Gymnastics World Cup set for Pesaro (ITA) on April 13 – 15 will welcome the discipline’s top gymnasts to the Adriatic Arena!

The tournament, which will enjoy its 4th edition this year, lines up 50 Individual gymnasts from 32 different countries as well as 14 Groups and star players from the sport’s most prestigious nations!

At the past edition of the Pesaro World Cup in March 2011, Evgenia Kanaeva (RUS) prevailed in the Individual All-around as well as on Hoop and Ball, while her compatriot Daria Dmitrieva took the title on Ribbon and Liubou Charkashyna (BLR) on Clubs.

This year in Groups, the Italian public will get to witness a dual for excellence between the reigning World Champions of their own country and their traditional rivals from Russia. The entries from Belarus, Israel and Ukraine are sure to spice up the competition and give a thrilling run for the podium.

In 2011, Russia beat the 2010 and 2011 World Champions of Italy in the Pesaro Group All-around, however the Farfalle took the title on 5 Balls, while Belarus prevailed on 3 Ribbons and 2 Hoops. With all title holders again competing in Pesaro, we can expect exciting competitions!

Parallel to the World Cup event, the 4th Pesaro International Junior Tournament “Citta di Pesaro” will be held in the Adriatic Arena. The competitions will be broadcasted live by Rai Sport on Saturday and Sunday.

The 2012 FIG World Cup circuit in Rhythmic Gymnastics includes one category A event (Sofia) and six category B events. Apart from Corbeil-Essonnes (Individuals only), all events include both Individual and Group competitions, with All-around competitions serving as qualifiers for the Apparatus Finals.

The world ranking points collected by competitors at their best four events of the circuit will add up to a total, and the top scorers in each discipline will be crowned the winners of the overall series at the ultimate event in Minsk.

Countries with gymnasts in the top 40 at the 2011 World Championships are entitled to participate with two Individual gymnasts; all other federations are allowed one gymnast only. All federations can participate with one Group. The current All-around champions of the Olympic Games, World and Continental Championships are invited to A and B World Cups and are in addition to the places listed above.

At category A and B World Cups, both Individuals and Groups qualify the best eight during the All-around competition for the Apparatus Finals. In the event of failure to qualify, the host federation may participate in one Individual Final of its choice.

The world ranking points collected by competitors at their best four events of the circuit will add up to a total, and the top scorers in the All-around and per Apparatus will be crowned the winners of the overall series at the ultimate event in Minsk.