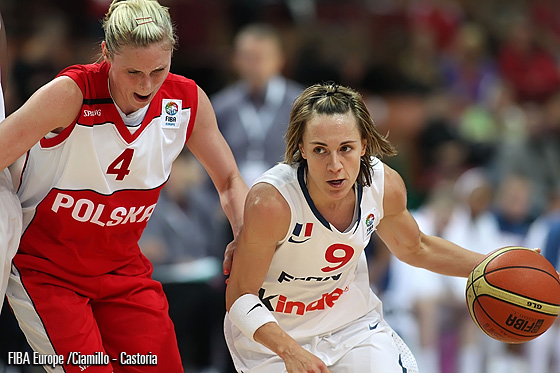 Germany, Feb 11, 2013: The guard was the clear-cut winner, easily winning the fan and expert voting polls, seeing off Eva Viteckova of the Czech Republic and Russia’s Becky Hammon. Dumerc was already renowned as one of the best guards in Europe prior to 2012, but by the time 2013 rolled around, Dumerc had established herself as the queen of the backcourt.

Dumerc was making the correct plays in London during the summer, averaging a team-high 14.2 points a night as the French blazed a trail to the Olympic gold medal game where they were finally halted by USA. The performance could not have come at a better time for France and Dumerc, who are now amongst the frontrunners to win EuroBasket Women, which is taking place on their doorstep later this year.

“In London, Dumerc showed her maturity in assuring her country would be the best finishing of the European teams at the Olympics. Having seen her performances there, it is of little surprise to see the fans and experts agreeing that she deserves this award,” said FIBA Europe President Olafur Rafnsson.

“It was a great year for Celine at both domestic and international level. I believe we will see similar performances from her this summer when her country hosts the EuroBasket Women tournament,” said FIBA Europe Secretary General Kamil Novak.