Dortmund-Germany, April 01, 2012: Title Chinese Teams,The winners two years earlier in Moscow, China retained their Men´sTeam title at the LIEBHERR World TeamTable Tennis Championships in Dortmund on Sunday 1st April 2012, and thus held high the Swaythling Cup for an unprecedented 18th time. At the final hurdle, China overcame Germany as they did in the Russian capital city, Moscow, in 2010. In Moscow, it had been by three matches to one, while in Dortmund, it was an even more convincing three-nil win. Under the guidance of Liu Guoliang, Zhang Jike, Ma Long and Wang Hao duly delivered. 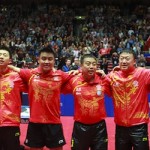 On their loss, German national coach Jörg Roßkopf commented: “I think we had a real chance today. The Chinese had to do their very best. We also had small opportunities but you really have to grasp at them against China. It is plainly visible: they have a great team. I hold my team in awe. The pressure on them was tremendous during this World Championship. We made it into the finals and we played extremely well.”

After their win, Chinese national coach Liu Guoliang said: “Again we are World Champion and that is well-deserved. The German team is the strongest national team in Europe and the spectators here are very table tennis-friendly. I hope the German team continues developing the way they do right now.”

In Zhang Jike’s victory speech, he said: “I’ve never played in front of such a fantastic backdrop. l was very motivated.”

Timo Boll, still motivated, commented: “In two hours I will be myself again. Perhaps it is one of my greatest qualities that I can get over these losses quickly. This game was important feedback for us. We are in a good mood and on the right track. We dominated the other teams. It motivates us even more for the Olympic Games.”

“Silver is just as valuable as a world title without China,” he added. “To really be a world champion, you have to beat China. This competition was a great experience, especially the opening day and the last three days. Of course it would have been even more memorable if there had been a real happy ending. But there is no cure against China. “

Silver medallists two years earlier, China laid the ghosts of the Olimpijsky Sports Complex in the Moscow suburb of Luzhniki, to rest in Dortmund’s Westfalenhallen on Sunday 1st April 2012. They overcame Singapore by three matches to nil in the finals of the Women’s event at the LIEBHERR World Team Championships, and thus gained revenge for the unexpected defeat suffered in Russia’s capital city. Once again, the Corbillon Cup belonged to China.

Singapore national coach, Zhou Shusen, commented: “China was truly stronger than Singapore, but it was an interesting encounter. “

Chinese national coach, Shi Zhi Rao, praised both teams: “I congratulate both teams. It was a high level encounter in front of the German crowd and very pleasant to watch. The atmosphere on the court after the game was amazing. The table tennis fans in Germany are very committed and specialists in the sport.” After the competition, Feng Tianwei remarked: “The 8 days were really tough. There is also a lot of room for improvement.”

Ding Ning: “I really improved myself and I am capable of winning big matches. To regain the world championship title was also very important. I haven’t thought too much about the Olympic Games. I was concentrating on the World Championships and will take it step by step.”

Fourteen Teams Advance to the Next Division

Four teams will play in the First Division in 2014

Four teams will play in the Second Division in 2014

Four teams will play in the Third Division in 2014