Home  »  OTHER SPORTS   »   Big buzz ahead of Olympic Dressage 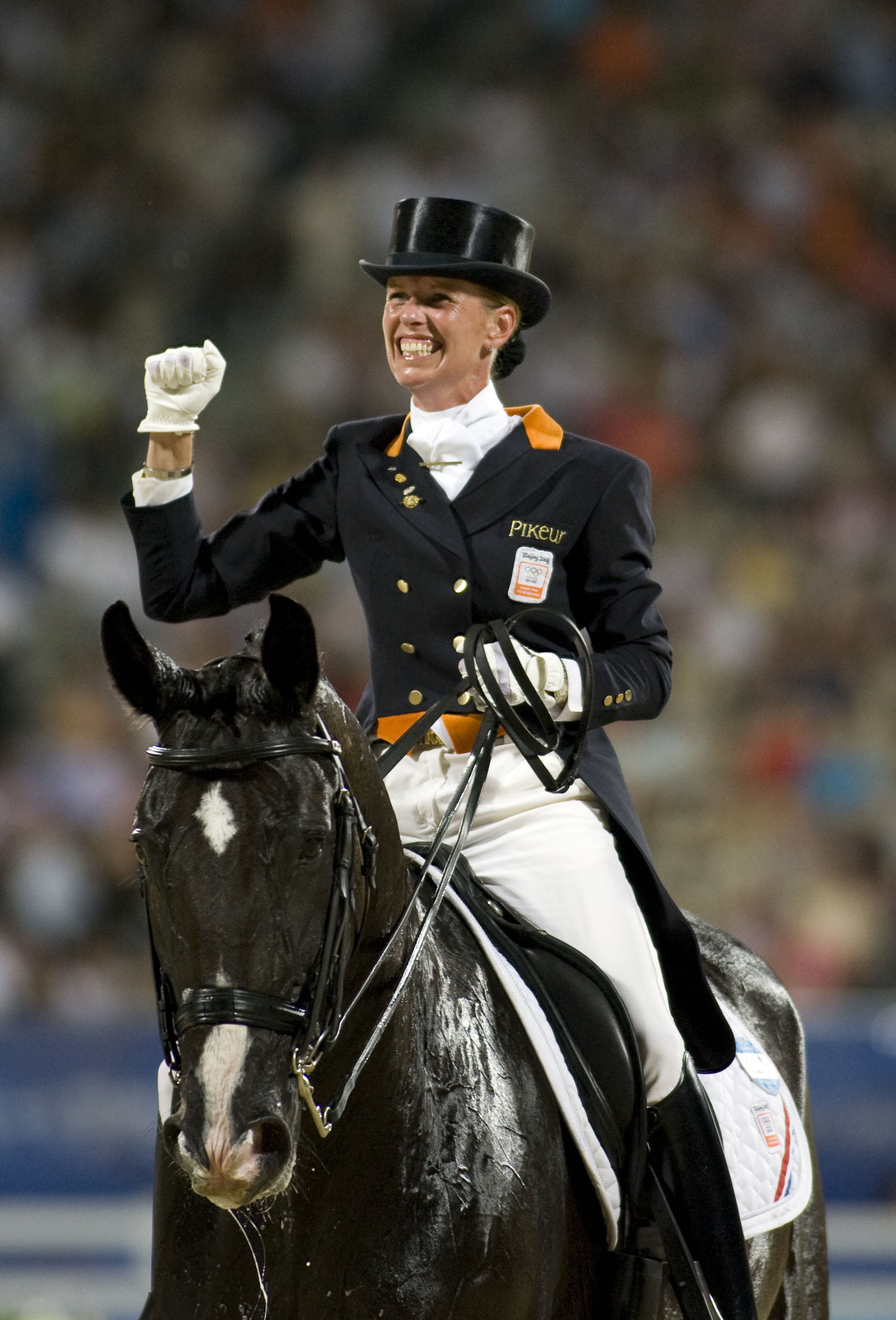 By: Louise Parkes, Lausanne (SUI), July 18, 2012: Olympic Dressage, There was a time when the world of international Dressage was all too predictable, but how much that has changed. Since the last Olympic Games in 2008 this sport has experienced an extraordinary make-over which, despite the reticence of the purists, has ensured that the buzz ahead of London 2012 could hardly be more electrifying.

Who could have known that one black stallion would prance into a floodlit arena on an August night in 2009 and that things would never be the same again? The Dutch combination of Totilas and Edward Gal are no longer together, and the horse whose magical spell attracted a whole new audience to this most disciplined of sports during a record-breaking spree that is already the stuff of legend, will not be returning to the country where it all began during the FEI European Championships three years ago. His new rider, Germany’s Mathias Alexander Rath, cannot compete in London due to unfortunate ill-health, but Totilas has already created a wonderful legacy – gone is the stuffiness, and the fear of making a mistake. If riders are prepared to take the risk, the rewards for expressive, inspired performances – while still retaining the accuracy – are scores like we have never seen before.

And the records just keep on tumbling. At Hagen CDI 4* in April this year, Britain’s Charlotte Dujardin and Valegro brought the German crowd to their feet when setting a new standard in the Grand Prix Special with a mark of 88.022%. Dujardin, who turned 27 last Friday, was a member of the quartet that claimed Great Britain’s first ever team gold medal at the FEI European Dressage Championships in Rotterdam (NED) last August. Not long ago, Olympic glory would have seemed an almost impossible dream for this year’s host nation. But now they are surely destined for both team and individual medals – the only question is what colour they will be, as Dujardin joins her mentor, the inimitable Carl Hester, and Alltech FEI World Equestrian Games™ triple silver medallist Laura Bechtolsheimer in the Grand Prix, which gets the first leg of the team and individual competitions underway on 2 August.

The Team medals will be decided after the Grand Prix Special on 7 August, which is also the second Individual qualifier from which the top-18, and those tied for 18th place, will go through to the Freestyle Final two days later. The Freestyle to Music is a stand-alone competition from which the individual champion will emerge. And it’s going to be like a pressure-cooker from the outset.

Teams consist of just three riders, and with all three scores counting there is absolutely no margin for error. In the other two Olympic disciplines – Eventing and Jumping – there are drop scores which leave some “wriggle room” for an off-form performance. Not so in Dressage – the slightest mistake, or spooky moment, will prove desperately costly, and of course an elimination will prove terminal for team chances. So, with a huge weight of expectation on their shoulders, riders must try to balance complete accuracy and obedience with enough sparkle and flair to get that extra edge right from the very start. No mean feat in the cauldron of tension that the Greenwich Park arena will become over the next few weeks.

And there is no breathing space either. Previously the team result was based on performances in the Grand Prix alone. However at London 2012, for the very first time, the results of both the Grand Prix and the Grand Prix Special will be combined to decide the final team classification.

The draw for the first class, the FEI Grand Prix, will be computerised and will take place after the First Horse Inspection. Starting spots for individuals will be decided first, followed by the order-of-go for teams. Individuals are drawn in reverse order of the World Dressage Rankings list in two groups, the highest-ranked riders drawn to compete on the second day of competition. Chefs d’Equipe will declare the running order of their team members no later than one hour before the draw takes place.

The second competition, the Grand Prix Special, is limited to, and compulsory for, the seven best teams in the Grand Prix along with the leading 11 Individual riders. If all three athletes of a team qualify, they may all participate. While last-minute substitutions are allowed in the Grand Prix, they are not allowed for the Grand Prix Special. A maximum of three athletes per nation can compete in the Freestyle Final which has long established itself as the most popular competition from a public perspective. The carefully chosen musical scores reflect the character and movement of the horse and symmetry with the rider. From marching music to poignant love-songs, the range is diverse, but each musical compilation is designed to fit, and complement, the partnership.

Underlining the tremendous growth in the sport, for the first time ever Dressage has overtaken Eventing in terms of the number of competing nations, with a total of 23 as opposed to 22. There will be 10 teams, five countries represented by a team and one Individual, 13 countries with an individual only, and a total of 50 riders in action.

The Netherlands’ Anky van Grunsven will be setting a new record when becoming the first Dressage rider to compete at seven Olympic Games. She already shares the record for most Olympic medals in Dressage – eight in total along with Germany’s Isabell Werth and Reiner Klimke – so she will be making history if she picks up her ninth in London.

Van Grunsven is defending individual champion, and the only Dressage rider ever to take three back-to-back Olympic titles – at Sydney (AUS) in 2000, Athens (GRE) in 2004 and Hong Kong (CHN) in 2008. She has been less visible in recent years, but will add huge weight to the Dutch side that also includes Edward Gal and double Reem Acra FEI World Cup™ Dressage champion, Adelinde Cornelissen, who took gold in both the Grand Prix Special and Freestyle to Music at last year’s FEI European Dressage Championships in Rotterdam (NED).

The country with the most outstanding record in Olympic Dressage however is, undoubtedly, Germany with 12 Team and seven individual titles to their credit. And the German team heading for London 2012 has a really refreshing feel to it. Helen Langehanenberg, who showed spectacular form throughout the Reem Acra FEI World Cup™ Dressage league last season, and who was just pipped for the series title by Cornelissen at the Final in ‘s-Hertogenbosch (NED) in April, was an obvious choice. But she was denied the honours in the Grand Prix at Aachen (GER) two weeks ago by Kristina Sprehe, who also went on to win the Grand Prix Special at the premier German fixture. Langehanenberg was back on top in the Aachen Freestyle, but Sprehe had made her mark, and Dorothee Schneider, who sprang into contention at the German Championships in Balve, claimed the third available team spot when finishing behind these two in that Freestyle. They are likely to prove a formidable force.

While the battle for the team medals is likely to be waged between the British, Dutch and Germans – with additional pressure from Denmark, USA and Sweden – there is plenty of scope for many other spectacular performances. America’s Steffen Peters and Ravel followed their victory at the FEI World Cup™ Dressage Final in Las Vegas (USA) in 2009 with double-bronze at the Alltech FEI World Equestrian Games™ a year later. Denmark’s Nathalie zu Sayn-Wittgenstein can always be relied upon for a great effort at the right time, and the Spanish can never be discounted. Beatriz Ferrer-Salat has produced some excellent results of late, while no major Dressage fixture would be the same without the flamboyant Juan Manuel Munoz Diaz, the showman of all showmen who knows exactly how to please the crowds.

The stage is set for an Olympic experience like none before. The last time the sport of Dressage set the world on fire, the event took place in the shadow of Windsor Castle and the winds of change altered everything. Three years later the spotlight returns to England once again, this time to Greenwich Park which is framed by many of the most iconic buildings on the London skyline and overlooks the River Thames. It is a superb location, and the perfect backdrop for Dressage that is set to bring the equestrian events at the Games of the XXX Olympiad to a spell-binding conclusion.

The Netherlands’ Anky van Grunsven will be setting a new record when becoming the first Dressage rider to compete at seven Olympic Games.

Van Grunsven already shares the record for most Olympic medals in Dressage. Along with Germany’s Isabell Werth and Reiner Klimke, she has won eight to date, so she will be out on her own if she picks up her ninth in London.

She is defending Individual champion, and the only Dressage rider ever to take three back-to-back Olympic titles – at Sydney (AUS) in 2000, Athens (GRE) in 2004 and Hong Kong (CHN) in 2008.

There will be three separate competitions – Grand Prix, Grand Prix Special and Freestyle to Music.

The Judges Supervisory Panel will be in operation for the first time at an Olympic Games.

The Dressage event starts with the First Horse Inspection on 31 July, and brings the equestrian competitions at London 2012 to a close on 9 August.

In the history of Olympic Dressage, Germany has dominated the medal tables, taking 12 Team and seven individual titles.

The last time the Olympic Games were staged in London, in 1948, Switzerland’s Hans Moser and Hummer won Individual gold in Dressage and France took the Team title.

The Judges Supervisory Panel (JSP), was introduced by the FEI in 2011 to provide an official back-up system to correct marking errors at all major events, including Olympic Games. The JSP also evaluates the quality of work of leading Dressage judges, assists in selection of those officiating at the top end of the sport and acts as a link between judges and the FEI.