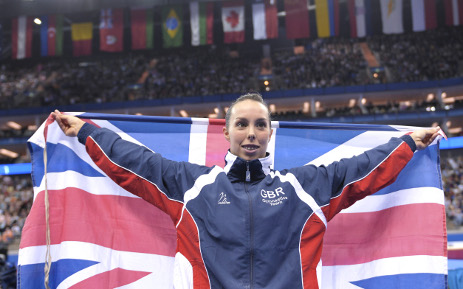 LAUSANNE (SUI), May 29, 2012: Beth Tweddle (GBR) is happy to admit that she has never been an ordinary gymnast.

“I wasn’t your ideal gymnast, I wasn’t the ideal weight, height, shape,” she reflects. “Had anyone said to Amanda [Reddin, her coach] that ‘she is going to be a world champion, she is going to be fourth in an Olympic Games’, then a lot of people would have laughed.”

If Tweddle confounded those early expectations to become Britain’s most successful gymnast of all time, she now faces a different kind of battle with expectations – namely, keeping a lid on them.

After all, as the standard-bearer for British gymnastics, a three-time world champion and six-time European champion, she must cope with perhaps the greatest expectations ever placed on a British gymnast’s shoulders when competing at her ‘home’ Olympics this summer.

Those Games will feel that little bit closer today (Tuesday) when she takes part in the 70-day, 8,000-mile Olympic torch relay around Britain – “I am doing it in Chester, where I was brought up” – yet the honour of carrying the flame would pale beside the satisfaction of claiming the medal she so covets, though she does not want to say it too loudly.

“Everyone knows we’d love to finish my career with a medal, but if I start putting too much pressure on it, it might backfire,” says Tweddle, speaking at the British Gymnastics team’s scenic, secluded training base at the Lilleshall National Sports Centre. “If it doesn’t happen I don’t want people to think of me as a failure or a disappointment. I want them to know that I have worked hard to try and get it and [to] know that I tried.”

Her use of words like failure and disappointment underlines the sky-high standards by which she is now judged. “It is harder in a sense because everyone just expects me to win medals now, it is not a case of ‘how did she do?’ it is a case of ‘why didn’t she do it?’ if I don’t medal. Even at the World Championships last year I came seventh on floor, I didn’t quite make bar finals, it was seen more as a failure,” says Tweddle, winner of World Championship golds on bars (2006, 2010) and floor (2009).

“You can’t win all the time, it is hard in our sport to be at the top,” she adds. “I’ve been there 10 years on the circuit and to constantly be the champion or chasing the champion is hard work. A third of a second out and you are flat on your face. It is very precise and some days it works, some days it doesn’t.”

One of those days when it did not work out came in Beijing four years ago, when Tweddle finished fourth on bars. “So close but so far away” is how she describes it. “I didn’t think I did well, I thought I’d failed again.” So when she got home and found herself assailed by wall-to-wall Olympic coverage, she was soon on another plane out of Britain. “I said to my flatmate, ‘Do you want to go away?’ so we got on a flight the next day and went to Greece. After four or five days out there, I had too much energy and I just said I need to go back in the gym.”

The hard-learned lesson of Beijing was a simple one that she will take with her when the GB squad head down to London in late July. “It is hard when you’re stood there and you’re thinking, ‘It’s the Olympics, it happens once every four years’ but go out and enjoy it as much as you can.” That may be easier said than done given the pressure on the home performers – “you are not going to be able to hide at this Olympics, whether you do well or badly” – yet whatever London brings, the fact the British team are looking ahead with such optimism is testament to an era of impressive progress, spearheaded by Tweddle herself.

She recalls: “When I was first on the circuit it was a case of ‘we’re going to go to the World Championships’. It wasn’t a case of ‘we’re going, we’re going to go top eight […] we’re going to get a medal’. Now everyone is working towards medals and trying to get that little bit further.” And she has high hopes for her team-mates in London. “There is some medal potential,” she says, running off a list of names that starts with Louis Smith, pommel horse bronze medallist in Beijing. “Ten years ago had you asked people to name a British gymnast, they would have just gone ‘I haven’t a clue’ whereas now there is myself and you can’t go anywhere at the minute without seeing Louis’s face,” she says. “He’s in adverts, he’s on billboards around London; it’s great for him and it’s also great for our sport.”

Her own status as a role model was brought home to her in the build-up to the European Championships which she has just missed out on through injury. “A couple of the girls [in the British team] said, ‘Oh we’re not going to have you there’. They do look up to me more than I realise.”

The cause of Tweddle’s absence was a knee operation she underwent in April after the discovery of a torn meniscus. “It had been torn for a while; I had obviously done something in the gym,” she says. “They said it could have settled down but then it probably would have flared up and had it flared up two days before the Olympics that would have killed my dream totally.”

If it was “a little bit of a setback” thankfully, her dream remains alive – though with Tweddle’s mental strength, it was never going to be any other way. “My coach has always said that is what allows me to carry on and succeed. Gymnastics is 90 per cent mental, if you stand at the end of the bars or the beam and think, ‘I can’t do it’ the likelihood is you’ll fall. Even when things have got me down, I’ve just shrugged it off and thought, ‘If they tell me I can’t do it, I am going to prove them wrong’.”

We are back to confounding expectations again. Tweddle is doing this merely by remaining a force to be reckoned with in world gymnastics at 27. “I think we have helped the outlook of gymnastics,” she says of the small but significant number of successful older gymnasts.

“If you had asked 10, 15 years ago the average age of a gymnast, people would say 15, 16, 17. Up until 2006 I was the only non-teenager to win a world title whereas in the past few years you have got Alicia [Sacramone], myself, Oksana [Chusovitina]. Each year there are more and more there out of their teens. [Catalina] Ponor has made an amazing comeback. Everyone is starting to show you don’t have to be that tiny little girl anymore.”

The training is “a lot harder” at 27 and demands a “clever” approach; but not so clever as to keep her going indefinitely. “I won’t be doing Rio, don’t worry about that,” smiles Tweddle, who has already begun planning for the future by setting up a company, Total Gymnastics, which aims to provide children with an early taste of the sport .

So it all comes down to London where she will seek to write a fairy-tale finish; some challenge, but then this is no ordinary woman.