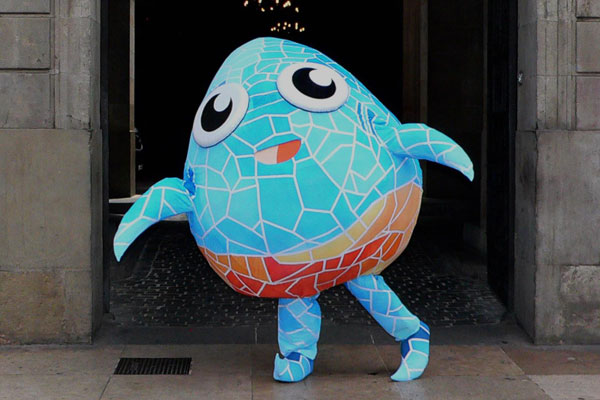 Lausanne-Switzerland, May 24, 2012: A drop of water will be the official mascot of the 15th FINA World Championships Barcelona 2013. The mascot has been introduced to society on May 22 and baptised in an act that has been presented by Gemma Mengual, who has just recently joined the Organising Committee of Barcelona 2013. According to the comments after the presentation, the guests are very satisfied about the new mascot, which is called Xop.

Maite Fandos, president of the Barcelona 2013 Organising Committee, has revealed the identity of the mascot, which has been elected the winner among 200 proposals that were sent to the event organisers of Barcelona 2013 as part of an online public competition. Xop covered in multi-colored mosaic tiles inspired by Gaudi’s art.

Fandos has underlined the importance of the mascot in a sporting event and has explained that it was inspired by the art of Antoni Gaudi. “The mascot reminds us of Barcelona, Catalonia and the Mediterranean. It depicts the tradition of Gaudi in a modern style. It will be a key promotional tool of the event, especially for children.”

The designer of Xop is Albert Mir, a Spanish artist from Menorca that lives in Barcelona. For the first time in his career, Mir designed the mascot for a sporting event. “It was coincidence that I even participated in the public competition and now I am very surprised that I got this far. I thought of a drop of water as the main element of an aquatic event and got inspired by Barcelona’s greatest architect. The mascot had to feature elements of the city,” Mir has explained.

The presentation, which has been held at the Sala Ciutat in Barcelona (City Hall) as part of an interesting exhibition of the different designs that event organisers received as proposal for the mascot, has been attended by the Executive President of the Barcelona 2013 Organising Committee, Fernando Carpena, who was re-elected as president of the Royal Spanish Swimming Federation for another four year term on Sunday.

Some of Spain’s best swimmers did not want to miss out on the official presentation of Xop. Jennifer Pareja and Laura Ester have represented the women’s national water polo team while Marc Minguell and Dani López-Pinedo of the men’s squad have attended the act.

The first public appearance of Xop in order to promote Barcelona 2013 is planned for next week, when the mascot will visit the annual gala of the Catalan Swimming Federation, whose president, Enric Bertrán, has also attended today’s presentation. Xop’s first event at a swimming pool will be the Ciutat de Barcelona Meeting, to be held at club CN Sant Andreu.