By Amelia Fisher-Starzynski, Paris, France – June 20, 2017: To mark World Refugee Day Paris, the Paris 2024 Bid Committee has joined forces with the City of Paris and the Office of the United Nations High Commissioner for Refugees (UNHCR) to organise a day of sport for refugees – highlighting how sport can be catalyst for change in society. 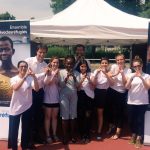 Every year, on 20 June, World Refugee Day celebrates the strength, courage and perseverance of millions of refugees.

This year, Paris 2024 Co-Chairs, Tony Estanguet and Bernard Lapasset, have partnered with Mayor of Paris Anne Hidalgo, the UNHCR and a number of other NGOs engaged in the reception and integration of refugees in the city, to stage an inclusive event bringing together migrants and refugees living in Paris with local Parisians in the practice of sport. 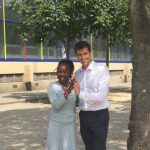 A number of French sporting federations also supported the event including those for taekwondo, football, wrestling, table tennis, badminton, baseball and cricket.

As part of the day’s activities, refugee children from the Paris-Ivry Humanitarian Centre participated in workshops organised by the NGO PLAY International (SOS Group), a pioneer in education and social change through sport.

In the afternoon, Tony Estanguet and Bernard Lapasset were joined by inspirational Kenyan Olympian Tegla Loroupe, an emblematic figure of refugee aid and inclusion through sport and Chef de Mission of the Refugee Olympic Team at the Rio Olympic and Paralympic Games, to lead sports activities for adults.

At the close of the event, Paris 2024 joined the UNHCR, City of Paris representatives and other organisations to exchange ideas and enhance opportunities for refugees living in the city as well as highlight existing projects being carried out.

It was also announced that Paris2024 would co-host a ‘Hackathon’, dedicated to sport inclusion on 1-2 July, with Techfugees, a start-up that aims to mobilise the innovation community to provide solutions to the challenges faced by refugees.

Using sport as a tool towards a more inclusive society is a key pillar of the Paris 2024 bid as established by its existing partnership with the Yunus Centre, which focuses on improving the quality of life of citizens, increasing social inclusion and supporting sustainable and equitable development, as well as its work with French aid agency Secours Populaire.

“World Refugee Day is an important day for us to stand in solidarity with people from around the world. I firmly believe that sport can make a difference to the lives of those who have been displaced and the sporting community has a responsibility to ensure that the opportunity to practice sport is accessible to all.

“I am proud of the work being carried out by Paris 2024 to ensure that our candidature has a positive and lasting impact on the lives of all people living in Paris including our migrant community. By standing together today with Tegla Loroupe – an inspirational figure within the Olympic Movement – and the UNHCR we are making sure that our message of open and welcoming Games in 2024 is heard beyond our borders.”

“The people of Paris stand side by side with refugees and we were pleased to be able to share a day of sport with Parisians and our migrant community at the Paris-Nord and Paris-Ivry Humanitarian Centres. Sport is a formidable tool for inclusion and we will continue to use it to build bridges and promote unity in our city. Sharing this day with committed athletes, such as Tegla Loroupe, a leading voice for refugees the world over, was a truly inspiring experience.”