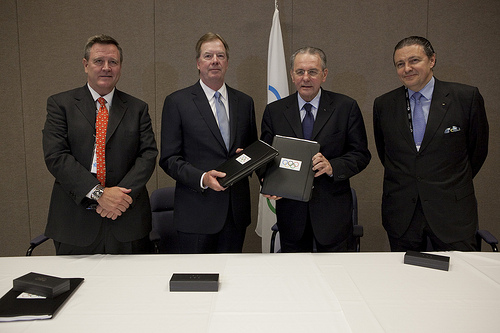 Lausanne-Switzerland, May 24, 2012: The International Olympic Committee (IOC) and the United States Olympic Committee (USOC) today announced the signing of a new revenue-sharing agreement that will govern the financial relationship between the two parties for two decades, beginning in 2020.

“The USOC is an absolutely crucial pillar in the Olympic Movement”, said IOC President Jacques Rogge. “This agreement lays a cornerstone which will provide the foundations for the continued growth of the Movement and our shared values, not just in the United States but around the world,” he added.

Commenting on the agreement, USOC President Larry Probst said: “I would like to thank President Rogge and his colleagues at the IOC who worked so diligently over the course of the last year and a half to find a solution that works for all parties. I can confidently say that we have accomplished that goal and have set the stage for a much more collaborative relationship going forward.

The agreement, signed six months prior to the date that negotiations were originally scheduled to begin, restructures how TOP and US television revenues are shared and also provides for USOC contributions to the IOC’s administrative costs associated with the Olympic Games.

“This agreement demonstrates the commitment of the United States and the USOC to the worldwide Olympic Movement,” said USOC Secretary General Scott Blackmun. “We look forward to working with the IOC, our fellow National Olympic Committees, the International Federations and our national federations to strengthen the Olympic Movement and enhance the resources available for athletes around the globe.”

“With this agreement, we can both look to the future and continue to support our common aims. It’s a tribute to the leadership team of the USOC that we have reached this deal ahead of schedule with a deal that underpins a crucial partnership,” said Christophe De Kepper, IOC Director General.

The new agreement paves the way for the further strengthening of the relationship between the IOC and the USOC and proves once again the importance of collaboration and partnership in the development and advancement of the Olympic Movement.