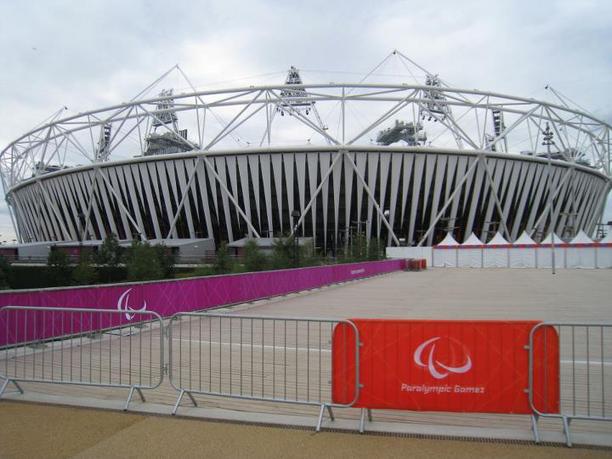 The venues were designed with both Games in mind but there are a number of specific changes to undertake. All venues will see the look and signage refreshed, the flags of the nations revised, adjustments to broadcast requirements, and changes to field of play, as sports in each venue are slightly different.

One example is the transition taking place at the Athletes’ Village. It has taken just five days (16-21 August) to transform a village that hosted over 10,000 Olympic athletes to host 4,280 Paralympic athletes, 3,500 team officials, 1,225 Games Officials and 22 assistance dogs (there will be 1,800 wheelchair users in total).

Fourteen tons of workshop equipment and spare parts have also arrived for Ottobock’s service provision for athletes, this includes a wheelchair repair centre.

One of the longest transition periods was up to 14 days (7- 20 August) at the Royal Artillery Barracks. Elements of this transformation include a field of play lighting refocus, seating bowl modifications and enhancements to make it a combined Paralympic venue for Shooting and Archery.

The giant Olympic Rings which are currently in cities across the UK and in London have started coming down. The Agitos, the symbol for the Paralympic Games will start appearing in London and cities in the UK over the next few days, with the first set launched in Cardiff last week.

The Paralympic Flag features three ‘agitos’ (Latin for ‘I move’) in red, blue and green – the colours most represented in national flags around the world.

Paul Deighton, Chief Executive, LOCOG said: “The transition to what will be the largest Paralympic Games ever is a huge operation in a short time period. We are getting ready to welcome the world’s Paralympians, and deliver a truly spectacular Paralympic Games.”

There are two new competition venues for the Paralympic Games:

• Eton Manor – situated in the north of the Olympic Park, features nine courts for the Wheelchair Tennis competition, all designed in a striking blue colour. During the Games, it will also house temporary training pools for Paralympic Swimming events.

17 venues will no longer be required and will be dismantled or decommissioned so that spaces can be returned to owners and the public. These are – BMX Circuit, Box Hill, Earls Court, Hampton Court, Hadleigh Farm, Horse Guards Parade, Hyde Park, Lee Valley, Lord’s Cricket Ground, Waterpolo Arena, Wimbledon and 6 Football stadiums.

Some venues will be used for different sports, including:

Existing venues which have been handed back to owners, include:

• 4,280 athletes – This is the first time many countries have attended a Summer Paralympic Games, including Albania, Antigua and Barbuda, the United States Virgin Islands and San Marino

• More than 1,800 wheelchair users to stay in the Paralympic Village, as well as 22 assistance dogs

• Preparations are being made to host more victory ceremonies. There were 302 in the Olympics and there will be 503 in the Paralympics

• 2,000 Fleet vehicles will be rebranded with the Agitos

• 293 buses will be converted to provide five or six wheelchair spaces: 266 in London; five in Weymouth; 22 in Eton Dorney

• The PRN will be much smaller than the Olympic Route Network (ORN). It will have just 8.7 miles of Games Lanes and, like the ORN, these will be operated flexibly and opened to general traffic if demand from Paralympic vehicles is low

• Street dressing will remain as dual branding. This is a first and has been agreed with the IOC and IPC.