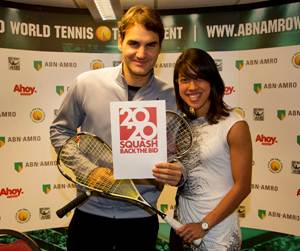 London, Feb 16, 2013: “I think it’s a wonderful sport. It’s unfortunate some sports don’t get the opportunity to be in the Olympics,” said Federer. “I think squash would deserve it. They run a great tour and they have great players and characters. I’d personally be very happy for them.”

The 17-time major champion had the opportunity to meet women’s squash world No1 Nicol David at the ABN AMRO World Tennis Tournament in Rotterdam. Federer expressed his support to David and revealed he played the sport growing up.

“I used to play it a lot when I was younger every Sunday with my dad,” Federer said. “I started with a wooden racquet like I did in tennis. I’ve always been a big fan of the sport.”

Federer and David conversed over dinner. David, a native of Malaysia and resident of Amsterdam, was thrilled to spend quality time with the Swiss superstar.

“It was exciting. He’s such a great guy and true champion,” said David. “He’s so down to earth. He showed us what it’s like behind the scenes to be a tennis player.

“It’s very similar to squash,” added the 29-year-old from Penang who has topped the women’s world rankings since August 2006. “So it’s been great to spend time with him.”

When asked if she played tennis, David said: “I’m a tennis fan but not a player. I follow Roger’s progress and he definitely brings the sport up to another level.”

World Squash Federation President N Ramachandran was delighted by the tennis star’s endorsement: “It is fantastic to have Roger Federer supporting Squash’s campaign to join the Olympic Sports Programme.

“His endorsement means a great deal because he is a true sporting icon who knows what it means to compete at the Olympic Games.” —- WSF

Squash Fan Federer Supports Olympic Bid, World No2 Roger Federer is backing Squash to be added to the Olympic Games programme in 2020

Squash Fan Federer Supports Olympic Bid, World No2 Roger Federer is backing Squash to be added to the Olympic Games programme in 2020