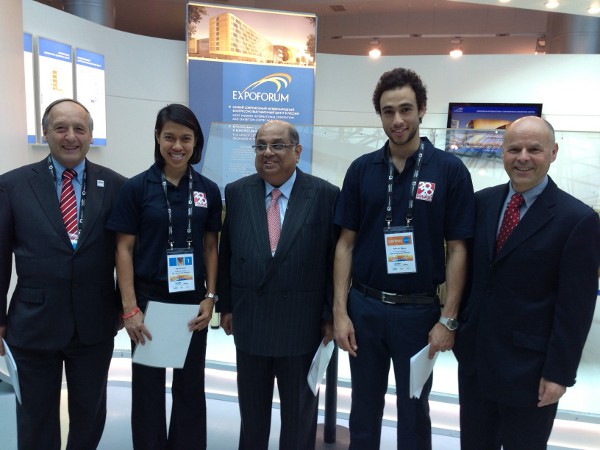 St Petersburg – Russia May 29, 2013: The World Squash Federation today welcomed the decision by the International Olympic Committee (IOC) Executive Board to shortlist Squash as a potential sport to join the Olympic Programme for the 2020 Olympic Games. The IOC Executive Board, which comprises 15 IOC members including President Jacques Rogge, made its decision after receiving presentations from eight sports.

The Squash presentation team included seven-time women’s world champion and world number one Nicol David, and Ramy Ashour, men’s world champion and world number one. Three films – which can be viewed atwww.worldsquash.org/ws/?page_id=11686 – were shown in the Squash presentation, including a newly-commissioned film which captures the broadcast innovations the sport has introduced in the last few years.

World Squash Federation President N Ramachandran, who led Squash’s presentation team, said: “This is a huge milestone in our quest to join the Olympic Programme and I would like to thank the Executive Board for the faith it has placed in Squash. It was fantastic to have the women’s and men’s world number ones on our presentation team, and Nicol and Ramy were passionate about what it would mean to them to have the chance to compete in the Olympic Games. It was also important that our presentation communicated the scale and breadth of innovations that Squash has introduced over the last few years, in particular in key areas such as broadcasting, and I believe we did that.

Malaysia’s Nicol David, seven-time World Champion, said: “This is a great day for Squash as it takes us one step closer to realising our long held ambition to join the Olympic Games. I said to the Executive Board that the one big regret in my career is that I have never had the chance to compete in the Olympic Games, but I would happily trade all my seven world titles for the chance of Olympic Gold. Hopefully that showed what competing in the Games means to me. It was a true honour to play a part in our presentation and I will do everything I can as we head towards Buenos Aires to help our campaign.”

Egypt’s Ramy Ashour, Men’s World Number one, added: “It was great for Nicol and me to be part of the presentation team and to represent the Men’s and Women’s professional Squash Tours. I think this was an important message to the IOC Executive Board as it shows what competing in the Games would mean to us and every single player on the tours. Being part of our presentation has fuelled even more my dream to compete in the Olympic Games, and I really do pray that this journey leads me to the Olympic Games in 2020, where I can make my country proud and win Gold for Egypt.”

President Ramachandran concluded: “Squash would grow all over the world with the Olympic Movement. We are a growing, global sport played in 185 countries by millions across the world. We offer the genuine prospect of new nations on the medal podium. We would be easy and low cost to integrate into the Olympic Games with just 64 athletes, two competition courts that can be built in days and we have a great track record of being hosted in iconic locations. I think all these elements were important considerations for the IOC Executive Board. It is critical now that we build further momentum and support ahead of the IOC member vote in Buenos Aires on September 8, and this is what the global Squash family is completely focussed on.”