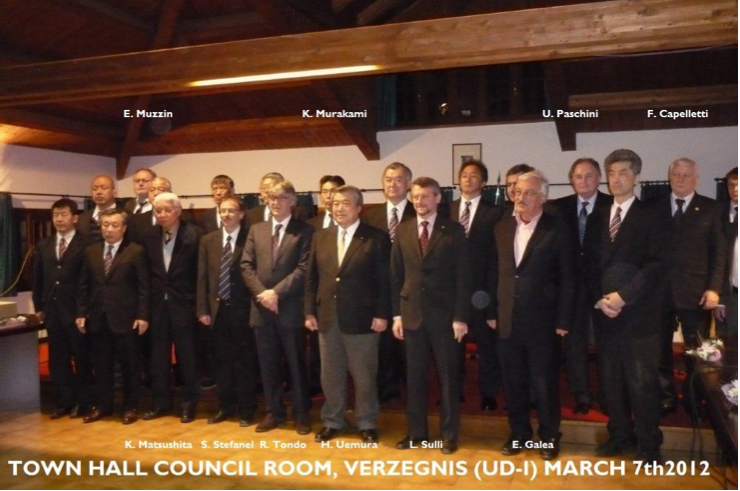 “Thank to the passion of the young Friulian Ubaldo Paschini and Nello Deotto, who gave birth to a historical Judo exhibition on the terrace of a local hotel facing Lake Verzegnis, as they returned from France, a seed was planted back in 1962. Since then this seed hasn’t stopped growing and producing great athletes, valuable leaders and glorious Sport Associations.

A special ovation is given to Master Paschini, nowadays 6° dan, for his dedication to the spread of Judo, founding a large number of Sports Associations in Lombardy, Veneto and Friuli Venezia Giulia, fulfilling prestigious roles in the world of Martial Arts and organizing The International Judo Competition “Abramo Oldrini”, which has been celebrated for the past 40 years. This is how Matteo Pellicone, Fijlkam President (Judo, Wrestling, Karate and Martial Arts Federation) wished to celebrate the protagonists of the exhilarating ceremony organizes in Friuli Venezia Giulia and the city of Verzegnis this past Wednesday 7th of March at the city hall of Verzegnis.

It is Master Paschini himself who gave us countless emotions during the ceremony of the so loved Carnia: the honor and pride given by his community on this occasion for the 50th anniversary of the first Judo exhibition in Carnia (“the tatami on which Nello and I fought – he reminisced with a smile – was a simple truck cloth. We put it down and started our exhibition on the terrace of the hotel“Ai Pini”), while posing for the picture with the most remarkable representatives of Judo Kodokan Tokyo of the Japanese commission, led by the Olympic champion Haruki Uemura, and the commission of the UEJ (Europa Judo Union).

“It was wonderful to see so many old friends together moved and excited” stated Paschini, after a long day among friends, memories and commemorations. Paschini’s day had in fact started early in the afternoon with the visit of Gemona del Friuli and the Museum of the earthquake in Venzone. There after the opening speech by the President of the Region Friuli Venezia Giulia Renzo Tondo, we also had the participation of Franco Capelletti, UEJ e FIJLKAM Vice president, Haruki Uemura, President of the Japanese Judo Federation Kodokan of Tokyo, Luciano Sulli, Verzegnis Mayor, Stefano Stefanel, FIJLKAM chairman appointed by President Pellicone to read the salutations, on behalf of FIJLKAM. Great commotion to Paschini was to hear his dear friend Marius Vizer words, President of the International Judo Federation (IJF), both sent by letter and read aloud during the ceremony by Elisabetta Fratini (IJF).

A great sports day which ended with a fellowship dinner and the return of all the commissions to Lignano, who had the honor to host the IJF Seminar dedicated to Kata, with the participation of the remarkable Masters of Kodokan,Tokyo (in September Pordenone will be the host city to the Kata World Championship).

“Two extraordinary international events – states Paschini – through which this generous land will be able to welcome sport once again”.