Home  »  MARTIAL ARTS   »   Salima SOUAKRI – The will to overcome obstacles 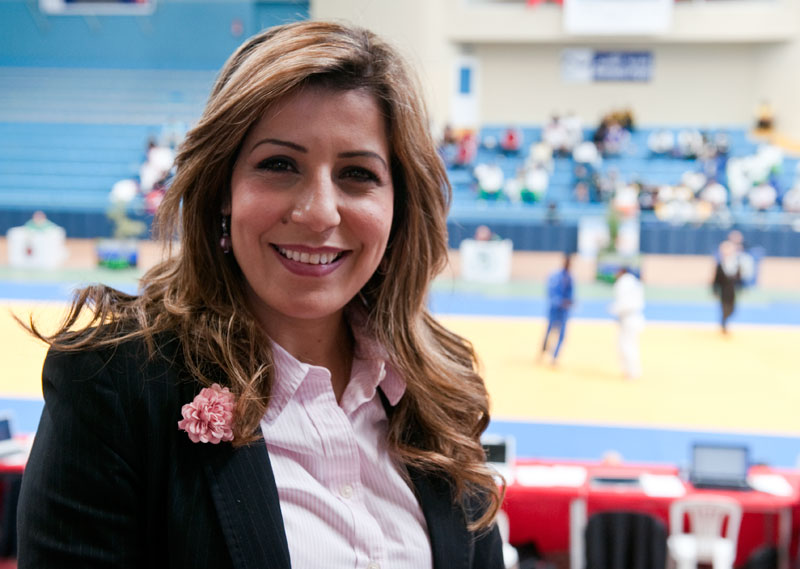 Jovial and relaxed, a smile lighting up her face, Salima SOUAKRI (ALG) is a happy woman. Appointed since October 9, 2011, UNICEF ambassador, the grand judo champion answered our questions with ease and enthusiasm.

For how long have you been away from the African Judo championship?

It has been a few years that I haven’t been able to attend an African Championship, but you know, I’m still totally invested in judo. It is just the way I am invested in my favorite sport that has changed.

You had an outstanding career?

With all the possible modesty, I can say that I am proud of my career. It was not always easy, but I overcame the obstacles and today I keep moving forward. The gold medal that I won in the Paris Tournament, where I was the first African to climb on the first step of the podium, remains an important moment in my career as a competitor. To go back to your first question, it is a bit strange for me to be here again, at the invitation of my federation. I won twelve African crowns during my career, and today I am a spectator … that is funny.

But you are not a simple spectator?

You’re right, I’m also an ambassador of judo in my country and I try, whenever it is possible, to make my contribution to the development of judo in Algeria but also in Africa and worldwide. You know, we are a few weeks prior to the Olympics, which represent a major turn in the career of all the athletes, who will be qualified, and our judoka need motivation and encouragement. That’s what I’m doing here. I know what it is to prepare for the Games. I know what mean commitment and selflessness. This is the experience that I want to share. Today, it is important for me to give back all I received. The younger generation of champions need it.

The Olympic Games and you, it is a long story?

It is a great story, but also a story that leaves me a little bitter because I’ve never managed to win an Olympic medal. I attended the first games available to women in 1992 in Barcelona. I am still much honored for that. But I was ranked fifth, three times, and I have also twice finished off the podium at the world championships. I hate that. Do not tell me about the fifth place (Salima Souakri adds with a smile).

Promised. Nevertheless, you have an outstanding prize list, even if your training conditions were not optimal?

You can not imagine. Our training conditions were very complicated in Algeria at that time. During the ‘dark decade’, we had to hide and meet at night in secret places to practice. It was dangerous and we often had to gather together after the curfew. For us, women, it was even more risky, but we have imposed ourselves. It was not the fear that could have stopped us.

You have been directly affected?

Yes my family. We were touched deeply in our flesh. Two of my brothers, who were policemen, were murdered. But we had to keep going and to live. I never left my country and never wanted to do it. I still live in Algeria today, but thankfully things are going much better.

What have you done since your retirement from the tatami?

I stopped in 2008 and I became coach of the women’s national team which had his best overall result in 2009 in Mauritius, with five out of seven possible titles. Today, I am still taking care of a club, the GSP, and we have a very successful senior women’s team. But I see my work elsewhere now.

Can you tell us more about that?

Early on, I felt that I needed to get involved in the humanitarian work. It was obvious to me. The day after my retirement, I joined the voluntary sector. I am now president of an association for the disabled, in a poor neighborhood. I’m also involved in the prevention of the dangers of drugs, especially in remote regions of Algeria. I think that sport is the best tool to combat these dangers.

What is your role exactly?

It is primarily to be an ambassador, but an active ambassador. Young people need idols, because idols are really helpful to spread the messages much better. I already said that I had participated in the 1992 edition of the Olympics in which women were represented in judo for the first time. At that time, which was really dark for our country, we were only three women to represent Algeria at the Games which Assiba Boulmerka, who became Olympic Champion in Athletics. For us the sport was a special ‘passport’ that allowed us to assert ourselves and revolutionize our women’s condition. I am proud and pleased to have been an actress of that human adventure.

You have recently became a UNICEF ambassador. What does this mean to you?

It is, above all, a great honor for me and I will do everything to be up to the expectations that people from UNICEF put in me, last October when I was nominated. You know, for me, this is a new battle to fight and to win, a battle for the defense of children. By promoting the sport, I want to tell to people and to convey the idea that the youth can succeed despite the difficulties.

This is your message?

Yes, undoubtedly. I think that with willpower, you can really overcome all obstacles and what is better than sport and judo for that. I want to promote sport as a tool for social development. I truly believe it.

What do you think about modern judo?

I think that the changes that were recently made in judo go in the right direction. Judo had slipped into something different from the sport that made me and still makes me vibrate. We are back on track. I find again a real pleasure to watch judo competitions. The technical level is improving and even if the qualifications for the Olympic Games have become more complicated, this is logical, because the during the Games, we must have the best of the best. I note with pleasure that resources are arriving in the world of judo. When I was competing, there were no prize money for athletes and the media interest was limited. You can not imagine how pleased I am to be able to follow the biggest international events on TV.

Thank you very much for your time. What conclusions would you make?

Thank you. Judo is pure happiness. Yes, life is sometimes difficult and complicated, I know what I am saying, but sport and simple values can help to really overcome obstacles.

View all posts by: Abdul Rahim
2 Responses to “Salima SOUAKRI – The will to overcome obstacles”