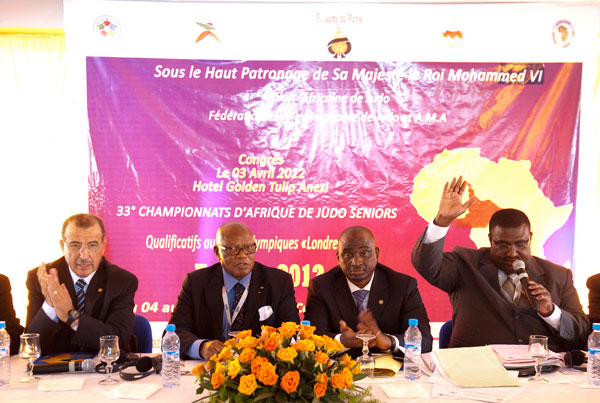 A Congress that was, during this Olympic year, particularly important since the entire board of the AJU, led by General Lassana Palenfo, had to be renewed. Among the 50 AJU member federations, 27 were present and were able to validate the re-election of the outgoing team in its entirety. The new Executive Committee is composed of:

See below for the full Directing Committee designated by the AJU President.

Earlier during the day, General Palenfo, on the occasion of his president’s report, stressed the dynamism of the whole continent and of the member federations, despite the obvious difficulties faced by many countries and the social-political crises which occurred during the last four years. “It is sometimes difficult for our federations to follow the international calendar, the distances are huge and the expenses are important, but we have very good relations with the International Judo Federation, which is assisting us in terms of equipment but also in terms of financial or human resources.”A few months before the Olympic Games in London, the IJF has also heavily invested in the Olympic preparation center in Algiers, a center which is an indispensable tool for the development of judo in Africa and for the continental athlete preparation.

General Palenfo also listed some of the possibilities that will be explored in the months and years ahead to support the growing development of judo from the north to the south and the east to the west of the continent:

– Development of learning progressions for coaches and teachers,

Following the President’s moral report, the other activity reports (general secretary, general treasurer, sports direction, refereeing director, coaching and education director and communication director) were also presented and all were approved by acclamation. All Directors have highlighted the important work that has been done to the benefit of the youths of all the countries.

At the end of the congress, several personalities were awarded by the AJU president. Among them, the former IJF Secretary General and member of the IJF Executive Committee, Dr. Hedi Dhouib (Tunisia) and the IJF development manager, Mr. Habib Sissoko (Mali), also vice president of the AJU.

During the press conference that followed the official draw of the competition, the IJF President, Marius L. Vizer, also highlighted the strengths of African judo: “if there is a continent that has massive potential in sports development, it is Africa. And this potential is even more evident in judo.” President Vizer also recalled that there was yet a lot of work to do: “Judo in Africa has a real future, but we have to work hard to catch up with the rest of the judo planet and turn opportunities into reality. The International Federation has put and still puts a lot of efforts to allow the continental Judo to find its true place in the international arena. For that, everyone has to work hard to build a clear future based on the structural, material, human and financial aids provide by our federation”.

Beyond everything is Education

The IJF President, supported by the AJU President, took the opportunity to focus on education: “Judo is the most educational sport than you can imagine and we really need to put education at the center of all developments, throughout the world, and even more here in Africa.”

Since the election of Mr. Vizer at the head of the IJF, over a million and a half dollars were invested in the development of judo and Africa has been largely helped. An extensive social program is being developed in South Africa, a program that will have to be replicated in other countries. The Judo for Children and Judo for Peace commissions are also very active in several African countries and the IJF, with the support of Algerian government, has set up the Algiers Olympic preparation center, which is including several members that will be present in London next summer.

At the end of the press conference, tribute was paid to the Royal Moroccan Judo Federation that has risen to the challenge of organizing the African championships, which were originally planned in Mali. Because of the events in the country, the competition had been transferred to Agadir. “I wish that Mali can quickly get out of its crisis and I want to congratulate Morocco for its tremendous efforts to organize the event within a short period of time” concluded Mr. Vizer.

During the week, 31 countries will be represented in Agadir, which represents a record.