After interesting and tough combat the talented Judokas made Pakistan on Second on the victory stand by securing 2 Gold, 3 Silver and 3 Bronze medals in individual events (Pakistan Judo Team).

The Federal Minister for Sports Riaz Hussain Pirzada, appraised Pakistan Judo Team’s performance in the championship and congratulated to Judokas and the Officials of Pakistan Judo Federation. 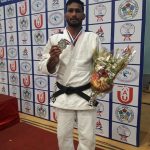 Olympian Shah Hussain Shah and a young and emerging player Qaiser Khan got Gold Medals whereas Maryam and Humaira Ashiq got Silver medals as well.

This was an easy win and was one sided game. Prior to the competition, Shah was sent by Pakistan Judo Federation to attend 6 weeks international Judo Federation Training Camp in Hungary.

He has proved his talent and the expectations of the Federation by wining supreme medal.

He defeated India in preliminary round, beat Sri Lanka in semi final and Nepal was his last target in the final. He recently joined after training as well competition tour in Uzbekistan.

In women event, Maryam got silver medal in -52kg by defeating Bangladesh in first round, Nepal in semi final, while she lost against India in the final.

Humaira Ashiq beat Sri Lanka in first round, Bangladesh in second round while beat Nepal in semi final. In finals she lost against India and was able to lift Silver Medal in her weight category. 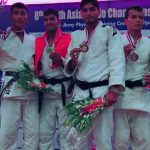 On conclusion of all individual events, Pakistan remained second with 2 Gold, 3 Silver and 3 Bronze medals while today in Team events Pakistan got Silver in men and Bronze in women.

In team events of men in first round Pakistan defeated Bangladesh, and then in semi final defeated Nepal but was defeated in final by arch rival India and got Silver by the ratio of 3:2, Nadeem Akram and Shah Hussain Shah showed their worth in team event while Qaisar disappointed to team, as he lost his fight

Moreover, in women team event Pakistan in semi final lost against India and defeated and then defeated Bangladesh to earn Bronze medal.

The President and Secretary of Pakistan Judo Federation, Col. Junaid Alam and Mansoor Ahmed along with the entire members of PJF extended their heartiest congratulations to team Pakistan and also thanked Pakistan Sports Board for their support for Pakistan Judo.

If Pakistan Judo team will get opportunity, the team will In Sha Allah show their best performance in the upcoming Asian Games, they hope.