The featherweight from Pakistan Mehmosh Raza faced Arben Escayo from Philippines in the undercard. 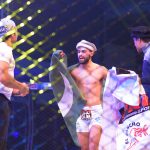 Training at Dragon Gym in Shanghai, Raza had a professional record of 8 wins and 2 losses as he entered the fight.

Raza didn’t hold back as soon as the bell rang in the first round.

The featherweight from Pakistan charged against Escayo to engage and took the opening to lock a guillotine choke on his opponent.

In 23 seconds the bout ended with Escayo tapping out to the submission.

The win marked the 5th in a row for the featherweight from Pakistan.

Raza will be joining the expanding featherweight division of the Brave Combat Federation which is currently reigned by Bubba Jenkins who was crowned the champion at Brave 16 hosted in Abu Dhabi, UAE.

The division is home to some of the best submission specialists and wrestlers in the promotion including Gabriel Fly, Marat Magomedov and Elias Boudegzdame.

Mehmosh Raza the only Pakistani fighter in the division signed in a multi-fight contract.

Apart from setting the record for the fastest submission in the promotion, Raza had also created a new record for the fastest finish recorded in Brave Combat Federation overtaking the previous record set by Djamil Cham from Netherlands who knocked out Alejandro Martinez from Mexico in 29 seconds at Brave 14 held in Tangier, Morocco.

At the same night, Mohammad Abbas Khan from KHK MMA showcased a brilliant victory by stoppage in 14 seconds, however the bout scheduled as an amateur bout.