Munich, May 20, 2017: Republic of Korea’s four-time Olympic champion Jin Jongoh, 37, came back atop of the ISSF World Cup podium, winning today’s 50m Pistol Men final in Munich with a new world record of 230.5 points, shuttering the 230.1 p.ts record set by India’s Jitu Rai on the 1st of March at the ISSF World Cup in New Delhi. 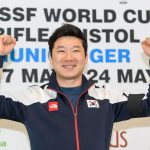 The event’s rules changed at the beginning of 2017, so all the records were set back to zero, including the final world record scored by Jin back in 2013.

Jin started-off the final with a 48.0-point series placing him in third place, and then climbed up the scoreboard to the lead half-way through the match, keeping the head of the pack until his last two shots, a 10.2 and a 10.4.

Portugal’s 53-year old Joao Costa, a 2015 European Champion, challenged him right to the end of the match, finishing in second place with 228.3 points, after closing his final with an 8.9 and a 9.6-point shots. Following them, Serbia’s Dimitrije Grgic, 32, took Bronze with 209.0 points.

“I won the match and I set a new world record, but I am bit sad. Because maybe the 50m Pistol event won’t be part of the Olympic program anymore,” said gold medalist Jin, referring to the proposed changes for the Tokyo 2020 Olympic program.

Jin is the most successful 50m Pistol shooter of all times, with three Olympic gold and one Olympic silver medals to his name in this event, along with an impressive number of 13 world cup medals, two world cup titles and one world championship title.

“I believe that the audience enjoyed today’s final, people were cheering and having fun. I hope that whoever is in charge to decide will change their minds, and reconsider the situation.”

A decision on the Tokyo 2020 Olympic program is due to be taken by the International Olympic Committee later this year.

In the following 25m Pistol Women final, reigning world champion Zhang Jingjing of the People’s Republic of China nailed her fifth ISSF World Cup gold medal in career. The 28-year old shooter moved into the lead after the second series, to finish atop of the podium with a total 36 hits after the ninth and last series.

She beat the winner of last year’s world cup in Baku, Bulgaria’s Antoaneta Boneva, 31, who closed the match in second place with 34 hits.

Olympic Champion Anna Korakaki of Greece took today’s Bronze medal with 26 hits. After the final, she was also awarded the 2016 ISSF Shooter of the Year title, along with Italy’s three-time Olympic Champion Niccolo Campriani.

The trophy is recognized every year to the two athletes who best represented the values of the Shooting Sport in the past season, through unique performances, behavior and character.

The winners were selected by a panel including members of the ISSF Athletes’ Committee, of the ISSF Coaches Advisory Board and by delegates of the international press.) —- ISSF