Ashgabat, May 3, 2017: Inspiring Ashgabat AIMAG 2017, State-of-the-art facilities, full-house attendances, standout performances and excellent spectator services were the highlights of the Inspiring Ashgabat Test Event series, the successful series for the Ashgabat 2017 5th Asian Indoor and Martial Games that will take place in September in Turkmenistan’s capital. 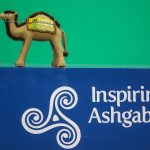 Inspiring Ashgabat AIMAG 2017, Ashgabat’s Olympic Complex played host to eight thrilling days of scintillating action, from 23 to 30 April, in three sports: Weightlifting, Kickboxing and Short Course Swimming. Through the Inspiring Ashgabat Test Event series, organizers had the chance to test the brand new facilities and all functional areas, as well as involve the citizens of Turkmenistan in the world of elite sports.

The Chairman of the 5th AIMAG Executive Committee, Dayanch Gulgeldiyev, believed that the test series achieved its objectives: “I can’t be more content with the result. This was a vital opportunity to test operations, plans and processes, and all aspects worked incredibly well.

“However, Inspiring Ashgabat was not exclusively a means to test our capacity ahead of the Ashgabat 2017 5th Asian Indoor and Martial Games. Our main concern as a nation is to build a strong sports community and spread awareness for a healthy lifestyle. In that way we will boost our policy to become capable of sustaining a high standard of living. Inspiring Ashgabat was a huge step towards the completion of our target.”

With the Senior Asian Weightlifting Championships, the Asian Kickboxing Championships and the Central Asian Short Course Swimming Tournament, Turkmenistan proved its capacity in organising large-scale, international sport events. Additionally, they provided a crucial test of operational readiness ahead of Ashgabat 2017.

Competition-wise, all three events reached high competitive standards, with thrilling action and close fights contested in front of capacity crowds. The fans were a major contributor to the vibrant and lively atmosphere in all three venues: the Aquatics Centre, the Martial Arts Arena, and the Weightlifting Arena.

Another key factor in the successful Inspiring Ashgabat outcome was the large presence and efficiency of the event volunteers, the First Stars. Dressed in green, Turkmenistan’s national colour, the First Stars provided warm welcomes and endless willingness to offer their assistance. Over 11,000 students have volunteered as First Stars for Ashgabat 2017, and their first experiences of international competition illustrate that they are ready for the bigger challenge of Ashgabat 2017 in September. —- LAUREL NEWS SERVICES