Ashgabat, April 24, 2017: Music and dancing inspired the spectators at the opening ceremony of the Senior Asian Weightlifting Championships at the Weightlifting Arena, Ashgabat 2017 Olympic Complex on Sunday. 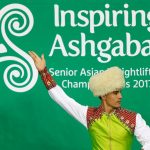 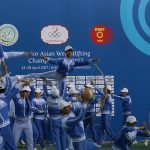 Toyli Komekov, Chairman of the State Sports Committee, officially opened the tournament in the Weightlifting Arena, located in the heart of the state-of-the-art Ashgabat Olympic Complex. 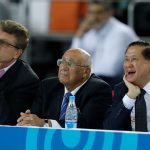 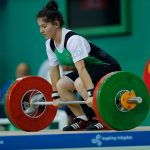 The President of the Asian Weightlifting Federation, Mohammed Yousef Al Mana, thanked Turkmenistan for hosting the Championships: “We are happy to be here in the great city of Ashgabat.

The president of the international weightlifting federation, Dr. Tamas Ajan, also showed his gratitude to Turkmenistan: “It’s a wonderful country, we are very happy to be here. We are talking about inspiring Ashgabat. This type of competition is very inspiring.”

Following the speeches, Turkmen musicians and dancers gave the public a taste of the Ashgabat 2017 5th Asian Indoor & Martial Arts Games, depicting all 21 sports on the programme of the Games in September.

Entry to the Inspiring Ashgabat Test Event Series is free of charge, however, tickets are required for entry. Fans who want to be a part of history while helping organizers assess the readiness of Venues, can collect their tickets from the Ashgabat 2017 Ticket Box Offices at Berkarar, 15 Years of Independence Shopping Centre and Ashgabat Park from 7 April.

Note:
Ashgabat 2017 is the fifth edition of the Asian Indoor and Martial Arts Games, which will take place in Turkmenistan from 17 to 27 September 2017.

Ashgabat was awarded the Games by the Olympic Council of Asia (OCA) in 2010. The 5th AIMAG Executive Committee will organise and run the Games in cooperation with the OCA. —- Laurel News Services