Chile, August 12, 2017: The fourth and final day of individual action at the Cadet World Judo Championships 2017 followed the previous days as the gold medals were shared around with the judo heroes of the future illustrating to the world the competitiveness and excitement of the sport at the premier competition for U18 judoka.

The competition is one of the most appealing showcases in judo as unknown teenagers show their extraordinary talent to the world and become overnight sensations. Seeing athletes at the start of their international careers is a stirring feeling as you see them grow with this experience and settle into life on the international circuit.

Coloured belts and pipe dreams are par for the course, as the stars of tomorrow get to grips with the invasion of their anonymity, as the winning judoka are earmarked as starlets and ones to watch on the journey towards the freshly awarded Paris 2024 and Los Angeles 2028 Olympic Games. 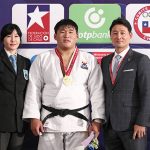 The competition experience and its various and copious demands will all feel routine in the future and the most avid of judo aficionados will recall with glee the initial foray of these young judoka as they go on to wear their country’s judogi with pride at the sport’s top competitions and compete for its greatest prizes.

Day four saw exactly 90 judoka compete across the girls’ -70kg and +70kg categories and the boys’ -90kg and +90kg categories as the heavyweights showed guile as well as grit with a rich repertoire of techniques on show in addition to some truly heavyweight ippons.

There is a lot to look forward to in the coming years in the heavyweight scene and many of Saturday’s judoka will return to action on Sunday for the first mixed team event at an IJF competition.

“The mixed team event was approved by the IOC for the Tokyo 2020 Olympic Games and this new and exciting format will be used at all future editions of the World Championships including later this month in Budapest.” 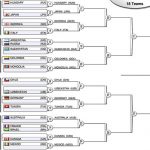 Japan finished top of the individual medal table with three gold, two silver and seven bronze medals ahead of Germany and Russia.

Gold medals were won by 11 countries with 26 countries medalling in an example of judo’s diversity which was lauded by IJF Head Sports Director Vladimir BARTA.

“We have all enjoyed a fantastic competition this week with a very high level of judo and a wide distribution of medals,” said BARTA.

“Each competition day had its own fascinating stories and we will all take away some great memories and introductions to a new crop of judoka.

The behaviour of the athletes was impeccable and, thanks to judo’s moral code which they have grown up with, they are all well on their way to becoming role models in their dojo, in their national team and in their countries.

“Now we are all set to conclude this year’s event with the first mixed team event and everyone is excited for this.

Team judo is highly-exciting and with this new format Sunday’s event will be something special. We have 18 teams competing which is a very good number. I have to thank all teams for their initiative and receptiveness to the mixed team format and I wish everyone success for the last day in Santiago, Chile.”

Cadet European Championships winner Marlene GALANDI (GER) won the first final on day four as she rushed past Millena SILVA (BRA) in just 24 seconds. SILVA, 17, the younger sister of Rio 2016 Olympian Mariana SILVA, had no time to get into the contest as the sister of German senior international Philipp GALANDI won the battle of the 1st Kyu brown belts by ippon with a deep seoi-nage. 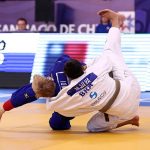 In the first semi-final two-time Cadet European Cup medallist Kim HOOI (NED) lost out to SILVA by a waza-ari score in a high-quality contest.

The Brazilian, whose coach was just as animated as her, fought back the tears after the realisation that she had qualified for the gold medal contest.

In the second semi-final GALANDI defeated Cadet European Championships silver medallist Morgane FEREOL (FRA) in a rematch of the continental final. A waza-ari was the difference as the German underlined her superiority to her French rival on the international stage.

The first bronze medal was won by MATSUMOTO Rizu (JPN) who, having won her previous contest with a majestic uchi-mata to qualify for the medal contest, threw her French opponent FEREOL with a harai-goshi for a waza-ari score which was the difference after four minutes.

The second bronze medal was claimed by 16-year-old Raffaela IGL (GER) against HOOI of the Netherlands. The Dutchwoman received a decisive shido in golden score to hand the contest and bronze medal to the German 2nd kyu blue belt.

Five-time Cadet European Cup winner Helena VUKOVIC (CRO) missed out on silverware at the Cadet European Championships and the European Youth Olympic Festival recently but saved her best performance for the world stage as she took victory in the +70kg category.

VUKOVIC may have done enough to earn a place at the Junior World Championships in Zagreb, Croatia, in October. 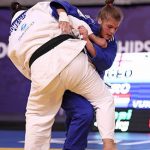 In the first semi-final SOMKHISHVILI surpassed Junior African Championships silver medallist Fatma ABIDI (TUN) as the latter picked up three shidos due to her inferior workrate and was disqualified.

European Youth Olympic Festival bronze medallist Eduard SERBAN (ROU) won Romania’s first medal of the competition and not only was it gold but it was also won against a Japanese judoka in the final. SERBAN and 15-year-old MORI Kenshin (JPN) were scoreless after four minutes and golden score was required to determine a winner and a loser.

MORI, who was one of the youngest judoka in the competition, launched an untidy attack and was caught off balance as SERBAN employed pure te-waza to throw his rival for ippon.

The Romanian shocked his opponent by taking advantage of a rare mistake from a Japanese fighter and he was opportunistic enough to take it just seven seconds into added time. 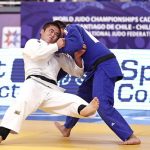 MORI bowed not only to his opponent but also to his coach in a classy gesture to show his dissatisfaction and sorrow for his error as he showed the world the etiquette and manner in which to accept a defeat. 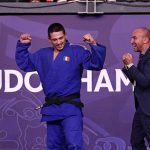 SERBAN celebrates with his coach

In the first semi-final MORI saw off 17-year-old two-time Cadet European Cup winner Emils GERKENS (LAT) by a waza-ari score for a place in the final.

In the second semi-final Cadet Pan American Championships winner Benjamin KENDRICK (CAN) lost out to SERBAN in golden score after receiving his third shido.

The first bronze medal was clinched by KENDRICK after Cadet European Championships bronze medallist Valeriy ENDOVITSKIY (RUS) was reprimanded with a shido for the third and final time for passivity.

The second bronze medal was won by 17-year-old three-time Cadet European Cup medallist Said GADZHIEV (RUS) who bested GERKENS by a waza-ari for the remaining spot on the -90kg medal podium.

KIM, who is undefeated in high school competitions at home over the last two years, is a dynamic heavyweight while BABAYAN also has a degree of athleticism which gave the heavyweight final all the ingredients to produce an explosive contest.

KIM attacked with a modified kata-guruma and moments later his yoko-tomoe-nage as his Russian opponent was on the back foot. With six seconds left on the clock BABAYAN initiated an illegal bear hug from which KIM was still able to throw with an uchi-mata for a waza-ari.

However, the score was cancelled and instead a third shido was correctly given to the Russian which resulted in hansoku-make for a third indiscretion. 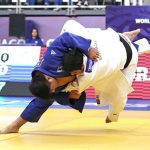 In the first semi-final BABAYAN held down 16-year-old one-time Cadet European Cup winner Leonardo SANT’ANA (BRA) for 20 seconds and ippon to move into the final. In the second semi-final Worlds debutant Jonas SCHREIBER (GER) was thrown by KIM via a seoi-nage for ippon.

The first bronze medal was won by SCHREIBER who overpowered Cadet African Championships winner Zouhair ESSERYRY (MAR) on the ground with osaekomi-waza in the form of a mune-gatame hold for 20 seconds and ippon.

The second bronze medal was captured by Omer AYDIN (TUR) with a true heavyweight ippon from a seoi-otoshi as he launched SANT’ANA for ippon with 13 seconds left on the clock.