Hohhot, July 01, 2017: The Hohhot Grand Prix, the latest location on the IJF’s high-octane World Judo Tour, engaged the middleweights on Saturday as a full house at the Inner Mongolia Stadium witnessed Worlds-bound stars competing for supremacy ahead of next month’s blockbuster in Budapest, Hungary (China clinches gold).

Day two featured the women’s -63kg and -70kg categories and the men’s -73kg and -81kg categories with Russia, Mongolia and Japan all fielding world-class judoka and competing for top spot on the medal table. 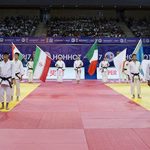 The opening ceremony was held before the final block on day two and started with a parade of the flags of the participating countries. After the respective anthems of the People’s Republic of China and the International Judo Federation, the honourable guests and distinguished figures were introduced to the crowd.

“I give you all my sincere thanks for your strong help for Hohhot to stage this fantastic competition. Judo is very popular in Inner Mongolia and is one of our strongest sports. This event will help to make judo even more popular here and I hope you all enjoy our beautiful and natural city.

“I am sure this Grand Prix will be a great success and I wish you all a pleasant stay in Inner Mongolia.” ZHOU Jinqiang, President of Chinese Judo Association and Director of the Administrative Centre of Weightlifting, Wrestling and Judo and General Administration of Sport for China, said: “Dear IJF President Marius VIZER, dear ladies and gentlemen and friends from the IJF, good afternoon to you all.

“I would like to take this opportunity to congratulate the IJF and Marius VIZER for their success in adding a Mixed Team Event to the Tokyo 2020 Olympic Games. I am delighted that you all came here to experience the first Hohhot Grand Prix and on behalf of the Chinese Judo Association I welcome all judoka, coaches, officials, athletes, media, fans and staff to Hohhot.

“I believe the Hohhot Grand Prix will be a dynamic and specular event for the judo family and I wish you all a healthy and enjoyable stay in Hohhot.” The stage was set for the IJF President Marius VIZER to declare the first Hohhot Grand Prix officially open.

“I want to thank the Chinese Government, the Chinese Olympic Committee, Hohhot city, judoka, coaches and officials for supporting this Grand Prix in Hohhot.

Thank you to all of you for together supporting this Grand Prix and promoting judo in this part of the world. “Thank you for the hospitality and friendship which you have shown to the judo community. I wish you all a successful competition, to enjoy Hohhot and I declare the Hohhot Grand Prix open.” 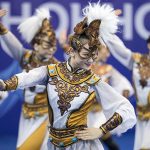 IJF Hall of Famer Neil ADAMS (GBR) is in Hohhot where he is pulling double duties as an IJF Referee Supervisor in the opening session and a commentator during the final block.

Great Britain’s first male world judo champion won the World Championships in 1981 either side of reaching the final in the Moscow 1980 and Los Angeles 1984 Olympics.

Double Olympic silver medallist ADAMS, 58, said that his Worlds dream was the driving force behind his accomplished junior career which sparked an illustrious senior career which is still talked about today.

“In the late 70’s I was obsessed with the idea of becoming a world champion,” said five-time European champion ADAMS. “I wanted it so much and by 1981 I was expecting to win. In 1979 in Paris I won bronze and I knew that I was capable of much more.”

Four-time senior world medallist ADAMS believed that he was destined to win the world crown in 1981. 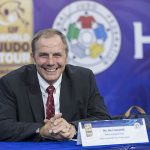 “I just knew on the day that I was going to win. My preparation had gone perfectly, physically and mentally I was ready and I was calm.

Facing KASE Jiro (JPN) in the final was something I had prepared for and I had beaten him just before the Worlds at the US Open. “He was so defensive and concerned about my tachi-waza but was given special instructions by his coach to stay away from the ground after our first ne-waza exchange.

Setting up the juji-gatame felt like a lifetime but it was progressive ne-waza which we thankfully now see a lot of in the present day. “To win the Worlds was an incredible moment and to win four medals from four attempts is something that I am very proud of but still I could have achieved even more.”

With the 2017 Suzuki World Judo Championships looming, ADAMS thinks that the amended set of rules for 2017 have given judoka more licence to produce positive judo and bigger scores. “We feel that the rules and the level of judo are moving in a very positive direction and this is a constant goal for us.

Ultimately we want to attract more fans to our sport, to show the world an exciting and dynamic product and I urge all sports fans to watch this year’s World Championships in August.”

Left out of the Worlds, Japan’s TASHIRO wins to prove a point   Double world bronze medallist TASHIRO Miku (JPN) put her frustrations in missing out on a Worlds place behind her to win Grand Prix gold in Hohhot.

TASHIRO, who won her only Grand Prix gold medal in Budapest in 2014, defeated five-time Grand Prix UNTERWURZACHER, who won the Tokyo Grand Slam last year, in the final.

The Japanese judoka failed to win a medal at the Rio 2016 Olympics and so Japan will not field a -63kg judoka at the World Championships.

TASHIRO led their head-to-head series 2-0 before today but fell behind to a waza-ari score and had to work to restore parity. With the crowd engrossed by the first final on day two, a mistake from the Austrian handed gold to the Japanese as the former was penalised for a leg grab with her third shido and was disqualified.

In the second semi-final TASHIRO pinned down Ulaanbaatar Grand Prix bronze medallist JI Yunseo (KOR) with a tate-shiho-gatame hold for 20 seconds and a place in the gold medal contest. The first bronze medal was won by Tbilisi Grand Prix silver medallist Edwige GWEND (ITA) who threw JI with a crowd-pleasing uchi-mata for a waza-ari score. 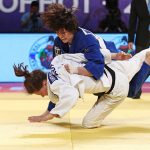 World number 16 GWEND will jump up several places on the World Ranking List as a result of this bronze and will travel to Budapest next month with a realistic chance of medalling at the sport’s blue ribbon event.

The second bronze medal was won by Tbilisi Grand Prix winner and world number 17 Magdalena KRSSAKOVA (AUT) who fought back from being a waza-ari down to defeat VALKOVA. The Austrian judoka levelled the score before throwing with an o-guruma for ippon with 37 seconds remaining in the contest. 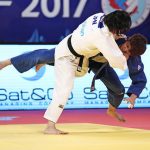 In the second semi-final KIM bested Tbilisi Grand Prix bronze medallist Natascha AUSMA (NED) by the maximum score with one minute left on the clock. The first bronze medal was claimed by former Junior World Championships bronze medallist AUSMA as JEONG Hye Jin (KOR) could not compete due to dislocating her elbow in her previous contest.

The second bronze medal was captured by the top seed MATIC who was superior to Tbilisi Grand Prix bronze medallist GERCSAK Szabina (HUN). The Hungarian judoka, who is relishing the prospect of a home World Championships next month, fought through the pain barrier having picked up a left knee injury in the preliminaries and struggled as the contest went into the latter stages.

Croatia’s MATIC countered a last-ditch ashi-waza attack for a waza-ari score with 12 seconds remaining and the Hungarian had to settle for fifth-place.

The capacity crowd were rooting for their man who hails from Mongolia and world number 18 SAIYINJIRIGALA did not disappoint as he defeated first-time Grand Prix finalist MARGELIDON by a waza-ari after 47 seconds of golden score.

The home judoka earned arguably the loudest ovation for a waza-ari of all time as he encouraged his compatriots to raise the volume by gesturing with his hands after being officially awarded the contest.

“I am over the moon, I am so happy to win in my hometown in front of so many fans who were incredibly supportive to me,” said China’s first gold medallist in Hohhot. 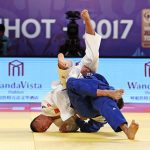 “Today we had many children in the crowd enjoying watching judo and they can see the importance of judo to our region and country. I hope they will be inspired by the efforts of the Chinese team at this Grand Prix.”

In the first semi-final Olympic bronze medallist Dirk VAN TICHELT (BEL) succumb to SAIYINJIRIGALA (CHN) by a waza-ari after 43 seconds of golden score. In the second semi-final former World Judo Masters winner Denis IARTCEV (RUS) was shocked by MARGELIDON (CAN) who won by ippon having initially been a waza-ari down.

The first bronze medal contest was won by world number 13 IARTCEV who topped number one seed Tommy MACIAS (SWE). Russia’s IARTCEV was all business and will see a route to the Worlds opening up now as he aims to win a medal at judo’s seven-day showpiece for the first time.

The second bronze medal was clinched by 23-year-old Mohammad MOHAMMADI BARIMANLOU (IRI) who outfoxed VAN TICHELT. MOHAMMADI BARIMANLOU was trying to get the feeling as he slowed the contest down to his own pace and it meant that it was not the type of contest where either judoka was going to be a showstopper.

The Iranian won his first medal at this level when Belgium’s VAN TICHELT received his third shido for being passive with 31 seconds left and MOHAMMADI BARIMANLOU pointed at the respectful crowd and his coach to say this one’s for you.

-81kg: Victorious VALOIS-FORTIER on course for world title bid in Budapest  London 2012 Olympic bronze medallist Antoine VALOIS-FORTIER (CAN) won his first IJF World Judo Tour gold medal since 2015 with a workman like performance in the -81kg category on Saturday.

The Canadian star – who made his post-Rio 2016 return in May after a spell on the sidelines through injury – celebrated Canada day in the best possible fashion with a win over European champion Alan KHUBETSOV (RUS). Four-time Grand Prix winner KHUBETSOV lost out after one minute of golden score as VALOIS-FORTIER won by a waza-ari against one of his main rivals for the top prize in Budapest. 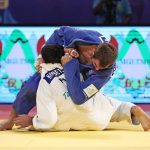 In the first semi-final KHUBETSOV defeated Rio 2016 Olympian LEE Seungsu (KOR) after 72 seconds of golden score by a waza-ari. In the second semi-final CSOKNYAI Laszlo (HUN) lost by a waza-ari out to VALOIS-FORTIER who hit his stride in Hohhot having slowly warmed back into action this year after a return from injury.

The first bronze medal contest was won by CSOKNYAI who ended a spirited challenge from u23 European Championships silver medallist Antonio ESPOSITO (ITA). The Hungarian judoka defeated his Italian opponent by a waza-ari score that came from a holddown. CSOKNYAI can be expected to produce a strong campaign in Budapest and will be lifted by his rewarding display here in Hohhot.

The second bronze medal went to European Championships bronze medallist Aslan LAPPINAGOV (RUS) who prevailed against LEE. Russia won half of the medals available in the -81kg category and their bronze was sealed by a waza-ari after four minutes of action as the contest went the distance. A hip throw from LAPPINAGOV sent LEE out of the area and over for the score and he comfortably held on for a place on the podium.