Seoul, June 16, 2016: The Official Emblem and Slogan of the FIFA U-20 World Cup Korea Republic 2017 were unveiled today during a festive event at KT Square in Seoul.

The Official Emblem of the FIFA U-20 World Cup Korea Republic 2017 is a celebration of the fusion of traditional Korean culture and the positive uplifting nature of the U-20 tournament, which will be held in six cities in Korea Republic from 20 May to 11 June. 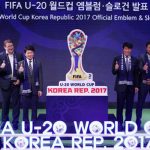 “With the Official Emblem and Slogan announced today, and with the fantastic preparations of the Local Organising Committee more broadly underway, we can be sure that the FIFA U-20 World Cup Korea Republic 2017 will connect with fans powerfully – raising their excitement, providing a symbol of the tournament’s unique identity, and leaving a lasting legacy as the tournament unites people in the development of future star players”, said Thierry Weil, FIFA Director of Marketing.