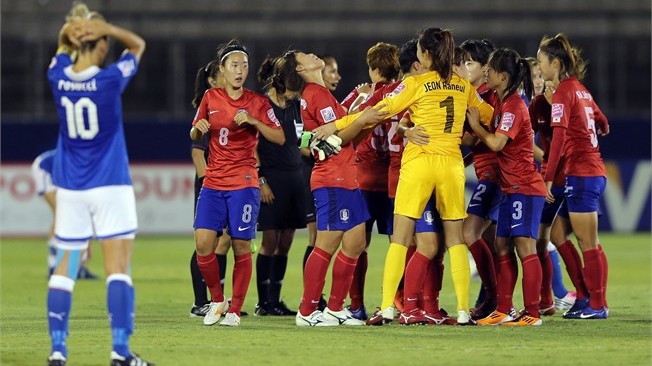 Miyagi/Saitama – Japan, August 22, 2012: THE DAY REPLAYED – exciting finale, Match day 2 in Groups A and B of the FIFA U-20 Women’s World Cup Japan 2012 proved a frustrating one for Nigeria and Switzerland, while Korea Republic got off the mark and Japan rescued a draw.

The Nigerians came close to booking themselves a place in the last eight only to be denied by a defiant Brazil, who conjured up another late equaliser to go with the one they produced against Italy at the weekend. The Swiss suffered an even worse fate as they crashed out of the competition following defeat to Mexico, their eighth consecutive reverse in the competition.

Meanwhile, Korea Republic showed they had learned the lessons of their opening-day loss to Nigeria, finally converting some of their chances and making light of the absence of Yeo Minji to down Italy 2-0. Held at bay for the best part of an hour, the Asian side secured the points when Lee Geummin and Jeoun Eunha scored within two minutes of each other.

Finally, Japan were given a nasty fright by fast-improving New Zealand in the day’s final game, the hosts going 2-0 down early on before fighting back to claim a point.

Leading thanks to Sofia Huerta’s fine strike just after half-time, the Mexicans were somewhat fortunate to hang on to their advantage as the Swiss pressed. The points were secured in injury time, however, as substitute Jimenez strode forward from the halfway line and unleashed a vicious drive from fully 30 yards out, right into the top left-hand corner of Pascale Kueffer’s goal.

Beaten by a long-range effort by Italy’s Elena Linari on Sunday, Brazil goalkeeper Daniele was undone from distance again on Wednesday as Francisca Ordega fired Nigeria into the lead with a well-struck drive. Sensing the custodian’s unease, Ordega’s team-mates Desire Oparanozie and Esther Sunday both went close with similarly lengthy efforts.

Coach Cuellar gets it right

After leaving striker Sofia Huerta on the bench on Matchday 1 and seeing his side get beaten 4-1 by Japan, Mexico boss Leonardo Cuellar atoned by handing her a starting place against the Swiss. Huerta scored her side’s only goal against the Japanese, and the Santa Clara University player popped up again just after half-time to set her side on the road to a crucial win.

Japan hang on in there, again

It was at Germany 2010 that Japan came from two goals down to make off with a point against Mexico, a feat they repeated against New Zealand on Wednesday thanks to goals from Yoko Tanaka and Ayaka Michigami. The draw keeps the hosts top of Group A, with the Kiwis second on goal difference.

6 – In scoring her sixth FIFA U-20 Women’s World Cup goal, New Zealand’s Rosie White moved into the competition’s all-time goalscoring top ten, level with USA’s Lindsay Tarpley. Appearing in the tournament for the third time, the Kiwi sharpshooter is the only player from the Oceania Zone to feature so high, though she still has some work to do to catch up on the competition’s leading strikers, Germany’s Alexandra Popp and Christine Sinclair of Canada. What is more, the latter pair both struck their ten-goal tallies in a single tournament, in 2010 and 2002 respectively.

“Our players were a little surprised by losing against Nigeria, they felt the pressure in the first match. We have to continue to play our style, it is the correct way to play football, by passing a lot and accurately.” Korea Republic coach Jong Songchon.

Next up – Today’s Fixtures:

Thursday 23 August (all times are local)