Home  »  FOOTBALL   »   FIFA sets the development of football in India 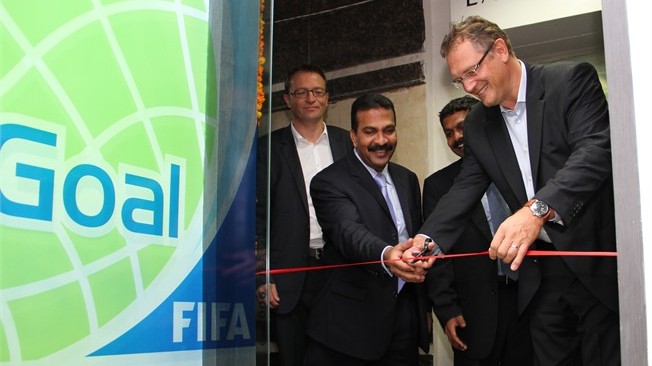 Zurich – Switzerland: A FIFA delegation headed by FIFA Secretary General Jérôme Valcke and FIFA’s Director of Member Associations and Development Thierry Regenass concluded today a four-day mission in India which saw football’s world governing body commit to increase its support, beyond all projects already conducted through the “Win in India with India” programme, to strengthen the development of football in the world’s second most populous country, with 1.2 billion people.

A Memorandum of Understanding setting concrete objectives, mainly in terms of strategy and management, technical development, league and club management, was signed by Jérôme Valcke and All India Football Association (AIFF) President Praful Patel on the occasion of a press conference in New Delhi.

A lack of infrastructures, a national team currently ranked 169th in the world, a national league struggling to compete with other leagues, especially European ones, to attract fans and TV viewership: these are some of the challenges faced by Indian football today.

“With India, we’re engaging on a 10-year development plan, which would include, if confirmed by the FIFA Executive Committee, the hosting of the FIFA U-17 World Cup in 2017 in India. There is no football without a strong base, without grassroots football. There is also a lack of infrastructures here which hinders the growth of the game too; in this area also, we will be active. With a population of 1.2 billion, it can’t be that you cannot have another sport than cricket. There is definitely space for football and, by the way, football is very much spread at school level. After this visit, we are even more convinced about India’s football potential,” commented FIFA’s Secretary General.

Jérôme Valcke went on explaining why India was chosen as a priority for the development of the game: “After the 2010 FIFA World Cup, we consulted the Asian Football Confederation and agreed together to concentrate our development efforts on one country where we believe the potential is huge, rather than on the entire continent which is so large. And that country is India. However, we firmly believe that the boost of the development of football in India will have a positive ‘domino effect’ on the neighboring countries as well.” The FIFA Secretary General actually met some of the Chairmen, Secretary Generals and Technical Directors of the SAFF (South Asia Football Federation) in India’s capital city.

Furthermore, the FIFA delegation was given the opportunity to hold individual meetings with major Indian business leaders from the private sector, including Mukesh Ambani and Pawan Munjal, who showed a real interest in investing in the game with a clear development objective and long-term vision in mind, rather than short-term “return on investment” expectations. A meeting with Atul Singh, President and CEO of Coca-Cola – long-time FIFA partner – India and South West Asia was also held.

Another important milestone was the meeting with India’s Sports Minister Ajay Maken who sent a clear message of support towards FIFA and AIFF’s plans, in particular when it comes to the government guarantees needed to host any FIFA competition.

“We have been fortunate enough to have President Blatter and now Mr. Valcke visiting India in the same year. It depicts FIFA’s interest in developing football in the country. Indian football is poised for a big leap after days of hibernation. FIFA is supporting us in our cause. They are going out of their way to see India emerge as a strong footballing nation. We have to start early if we want to grow as a footballing nation and develop the grassroots. We need to work on the pyramid and that stays the main objective of the Federation. Unless we have players being nurtured from the age of 12-13 we won’t grow. We have a 10-year Master Plan called Lakshya and our aim is to qualify for the 2022 FIFA World Cup”, stated AIFF President Praful Patel.

The FIFA delegation completed its mission by taking part in the International Football Arena Roundtable New Delhi 2012, an event organized in cooperation with FIFA, which gathered main stakeholders of Indian football as well as top representatives from international football (see: www.international-football-arena.com). —- FIFA