Abu Dhabi, UAE, Oct 13, 2018: With just under two months to go until the start of the FIFA Club World Cup UAE 2018, Brazilian icon and FIFA Legend Roberto Carlos shared his excitement ahead of the tournament earlier today.

He is visiting the UAE this weekend and has invited fans from around the world to gather in the country this December to witness the world’s top players and clubs in action. 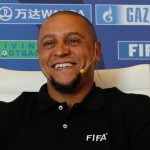 With pace to burn and one of the most famous left feet in the game’s history, Carlos knows a thing or two about football, having made over 800 appearances for some of the world’s biggest clubs during a glittering career spanning three continents.

When he speaks about football, people listen.

“Taking place from 12 to 22 December, the FIFA Club World Cup UAE 2018 represents an incredible chance for fans from around the globe to see some of the world’s best players and club teams,” said the iconic former left-back.

“With two world-class stadiums and some of the world’s best clubs already confirmed to play, this year’s FIFA Club World Cup will be an unmissable opportunity for fans to watch their footballing heroes and to have a truly memorable experience in the UAE.”

The FIFA Legend – who twice won the Intercontinental Cup (the predecessor to the FIFA Club World Cup) during his years with Real Madrid’s Galácticos – also made a special appearance at the Louvre Abu Dhabi and the Yas Mall during his visit to the UAE, as well as meeting with fans of all ages and nationalities.

“Playing in international club competitions and winning international trophies for my club was a truly special experience for me.

I was lucky enough to win the Intercontinental Cup twice and I know first-hand how important international competitions like the FIFA Club World Cup are to both players and fans.

Great players and great teams want to show they are the very best at every opportunity and I know Real Madrid will want to win this trophy for a third straight year.

The other teams and continental champions will also be eager to test themselves against the best, to seize their chance and win a tournament that represents the pinnacle of international club football.”

His reputation as a player and a FIFA ambassador was evident in the buzz his appearance created at Yas Mall. It was a great sight to see him engaging with fans young and old.”

“Great players like Roberto know the importance of tournaments such as the FIFA Club World Cup.

This year’s tournament gives supporters a unique opportunity to see the best players in the world, the stars of the future and maybe the next Roberto Carlos.”

The FIFA Club World Cup UAE 2018 will bring together the continental champions from FIFA’s six confederations – the AFC, CAF, CONCACAF, CONMEBOL, OFC and UEFA – alongside host team Al Ain in a battle to be crowned the top club on the planet.