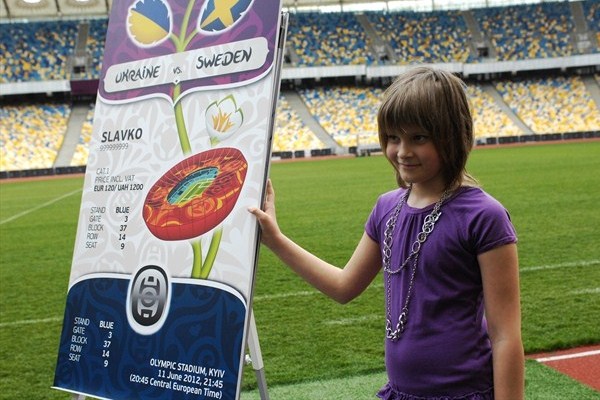 By Dmytro Sobko & Daniel Olkowicz from Kyiv and Warsaw: The UEFA EURO 2012 ticket design has been unveiled at special presentation ceremonies in Warsaw and Kyiv.

EURO ticket design, With 46 days to go before the opening match of this summer’s tournament in Poland and Ukraine the design of the tickets was revealed at Kyiv’s Olympic Stadium, the venue for the final, and Warsaw’s National Stadium, where the championship will get under way on 8 June.

“I’m very happy to award a symbolic ticket to this young girl,” said Mr Surkis, handing it over to the young artist as her winner’s prize. “I believe our children will take advantage of this great opportunity we have, as a country, in hosting UEFA EURO 2012.

“I hope that coming generations will appreciate the great efforts that have been made by all those who have created new opportunities for self-improvement. I believe that for Darynka and many other children, this ticket will come to symbolise a permit for a better future.”

The ticket is horizontal with a large flower on the front, the leaves of which depict the stadium hosting the match and the flags of the two countries involved. The number of the match appears in a flower bud, with seat details also printed on the front. Instructions on how to reach the stadium can be found on the reverse along with a security strip.

“There has been talk that the tickets are already in circulation in Ukraine, but it is not true,” said Mr Lubkivskiy. “We only have the design now. The actual tickets will be received by fans three or four weeks before the beginning of the European Championship by registered post. The tickets have several levels of protection and it will be almost impossible to imitate them.”

Poland’s UEFA EURO 2012 ambassadors Zbigniew Boniek and Andrzej Szarmach attended the Warsaw ceremony along with Marta and Lukasz, the winners of Poland’s drawing competition. The youngsters each received a ticket for the opening game between Poland and Greece for their artistic efforts. “I am really pleased that I took part in the contest,” said Marta. “I couldn’t imagine winning it and it really is an extraordinary prize.”

While tickets have sold out in Poland, Martin Kallen reminded fans still interested in matches to be staged in Ukraine that they will get one last chance to purchase tickets next month. “More than 95% of the tickets have been sold,” he said. “About 50,000 tickets will be on sale from the beginning of May, because not all the participating federations have taken their full allocation.” Image ©Pavlo Kubanov