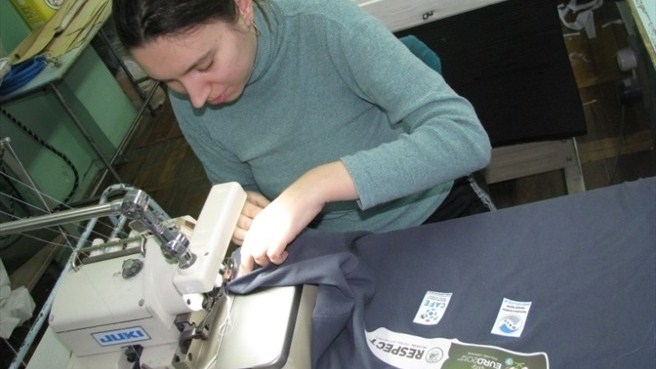 Switzerland, April 02, 2012: Disabled workers aid, UEFA’s work with the Centre for Access to Football in Europe (CAFE) is bearing fruit in Ukraine where disabled people are involved in putting the UEFA EURO 2012 Respect Inclusion – Football With No Limits project into action.

UEFA and CAFE are collaborating on this project which includes the monitoring of access to public places in each UEFA EURO 2012 host city. More than 100 project volunteers were trained to make accessibility assessments of hotels and restaurants, public transport, and other facilities that will be used by visiting fans during the tournament in Poland and Ukraine.

To make these volunteers more visible, as well as for better promotion of the scheme, all have been issued with a uniform bearing Respect Inclusion branding. In Ukraine, CAFE’s local partner, the National Assembly of Disabled People, has sought to involve disabled people even more directly by working with the Kyiv manufacturing company Socium Plus.

Socium Plus employs disabled people in producing sports clothing and has been cooperating with the Football Federation of Ukraine (FFU) and FC Dynamo Kyiv for the last four years, making football kits and football-related souvenirs. The company has also supplied a full retro collection of Dynamo Kyiv kits, from the year of the club’s establishment in 1927 up to 1986.

Borys Volyansky, general director of Socium Plus, said: “There are 62 disabled employees in the company who work with modern sophisticated equipment and perform their duties to a professionally high standard. A creative department was established to allow disabled people to suggest and implement their personal creative ideas.”

Nataliia Skrypka, executive director of the National Assembly of Disabled People, praised the initiative when she said: “This is a really inclusive approach which is promoted by the Respect Inclusion project.”