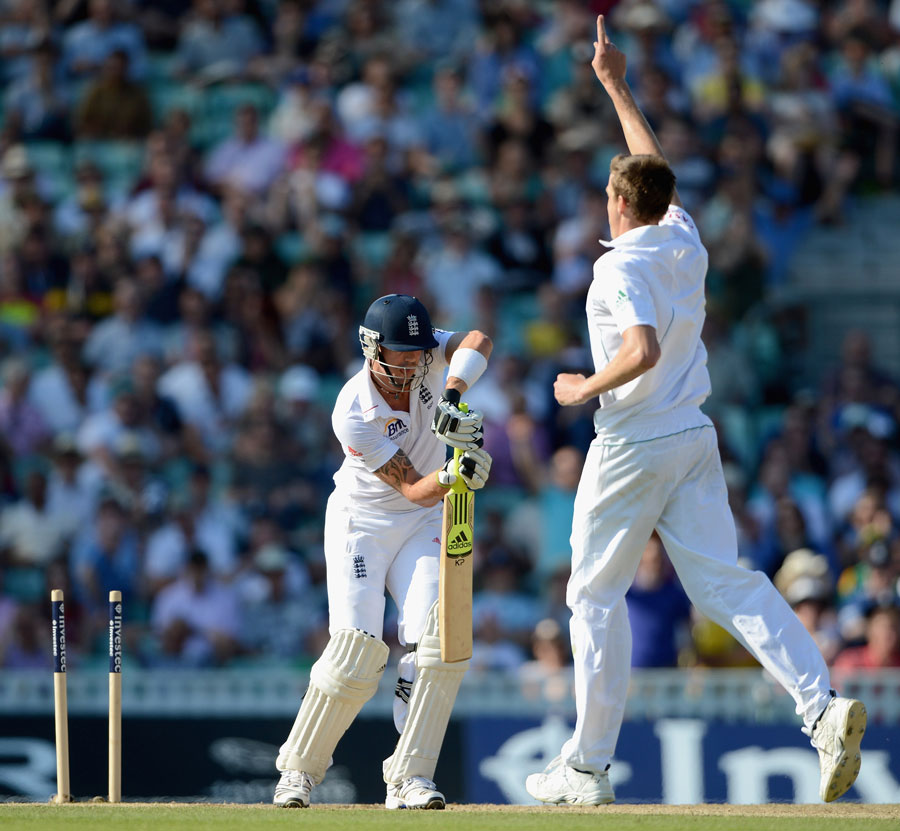 By: Andrew McGlashan, The Oval, July 22, 2012: South Africa enjoyed the type of day teams dream of which ended with England staggering on 102 for 4 after being overwhelmed by the insatiable hunger of two batsmen. Hashim Amla scored the country’s first triple century in Tests, building an overwhelming stand of 377 with Jacques Kallis, as South Africa amassed a lead of 252. The visitors then made major inroads into a dispirited England side who lurched to the close with a huge task ahead to leave The Oval with the series level.

The first two sessions of the day were filled with Amla and Kallis earning themselves a place in the record books. Mostly those honours belonged to Amla who, after overtaking AB de Villiers’ 278 as South Africa’s highest innings, reached his triple century with a drive which brushed the fingers of a leaping fielder at cover. He barely put a foot wrong and looked as though he could have gone past Brian Lara’s 400 if the opportunity had presented itself.

However, South Africa had a Test match to win. Graeme Smith surprised most people at the ground when he declared at tea, rather than giving England’s footsore bowlers and fielders another half an hour of drip-drip agony. Smith, though, knew his team was in an impregnable position and it was a show of attacking intent from the captain.

Apart from a period on the first day, Smith has had a wonderful Test both with the bat and in the field, and his decision soon brought rich rewards. By the close Ian Bell and Ravi Bopara were clinging on, still facing a deficit of 150. An escape here would match anything achieved at Cardiff or Cape Town.

With the eighth ball of the innings Vernon Philander – who again shared the new ball with Morne Morkel – found Alastair Cook’s outside edge with ball that nipped away to bring the first wicket of the day. By the 11th over, South Africa had as many wickets as England managed in 188 when Jonathan Trott, for the second time in the match, nibbled outside off stump when he could have left the ball. That gave Dale Steyn his first wicket after he had been brought into the attack much sooner than in the first innings.

Kevin Pietersen’s brief stay in the middle was not one of his finest moments. A feature of how South Africa batted was that they were willing to give periods of time to the bowlers, but Pietersen wanted to impose himself from the start. When that method comes off it thrills; when it does not it will invite criticism.

Pietersen played two well-timed pulls, one in front and one behind square, but also top-edged another over the keeper. He was then dropped at slip by Kallis when he flapped at a short delivery from Morkel and in his next over Pietersen managed to miss what was basically a straight ball as he was caught on the crease.

The early breakthroughs made life much less pressurized for Imran Tahir and he proceeded to work over Andrew Strauss with a classy over from round the wicket. He located the footmarks to make one delivery spit and also skidded one past the outside edge. Then, in a flashback to England’s problems in UAE, Strauss was drawn into sweeping a wide delivery and the resulting top edge looped to square leg. Strauss had turned in disgust before the catch had been taken. This was not the first time an England captain had been humbled by a Smith-led team.

This was the same pitch that, a few hours earlier, had produced a scoreboard that read 637 for 2. Amla and Kallis firstly ensured they played themselves in as Smith and Amla had done 24 hours previously. The first hour brought just 36 runs, but each demoralizing over England spent in the field meant it was less likely they would be able to quell the onslaught once South Africa decided to switch gear. The second half of the session saw 75 runs added and a further 123 came between lunch and tea even without it feeling the batsmen went quite into top gear.

Amla’s innings was a display of unyielding concentration and determination, yet he rarely lost his graceful touch until he became a little tense in the 290s. His driving continued to be the stand-out feature of the innings and even when England packed the off side he would calmly and carefully pierce the gaps with regularity.

Kallis, who began the day on 80, batted at his own pace and reached his hundred from 227 deliveries with a glide to third man and immediately pointed to his eye, a clear reference to his team-mate, and close friend, Mark Boucher who was forced to retire early in the tour. The incident shook Kallis badly, but like many of the greatest sportsman he has channeled his emotions to the benefit of his team.

It was also, notably, his first Test hundred in England since Old Trafford in 1998. This will be his final Test tour to the country and he appears determined to at least go some way to narrowing the gap between his record here and everywhere else. His partnership with Amla, to follow the 259 for the second wicket, was the highest third-wicket stand against England by anyone and meant it was the first time they had conceded two 250-run stands in the same innings.

It was a sobering experience for the England attack. When James Anderson managed to swing a delivery with the third new ball past Amla’s edge the crowd gave him a warm round of applause. Early in the afternoon session all England’s frontline bowers went past their centuries, Stuart Broad completing the set when he was driven for three boundaries by Kallis who took the lead in upping the scoring rate while Amla focused on his triple hundred.

Broad had been off-colour throughout the innings and operated at no more than medium pace on the fourth day. Although that could partly be put down to conditions, England’s policy of a four-man attack means they cannot afford to carry any of their quicks especially with Graeme Swann proving ineffective as he sent down 52 wicketless overs, the most he had bowled in a Test innings. Since the start of the second day’s play they have looked anything but the world’s No. 1 team.