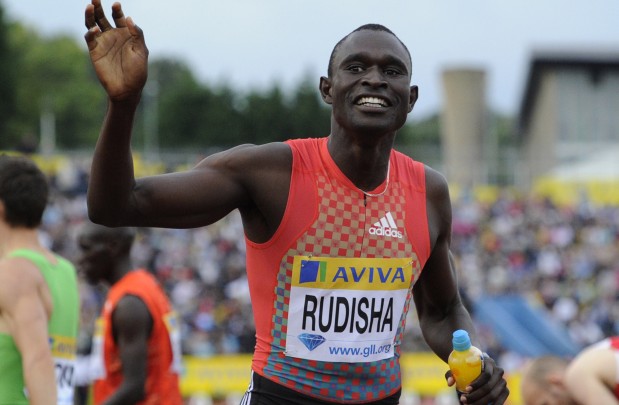 Monte Carlo – April 11, 2012: David Rudisha became the latest global superstar of the sport to commit himself to the 2012 Samsung Diamond League and heralding the fact that there is exactly one month to go before the opening meeting on Friday 11 May in Doha, Qatar, Kenya’s 800m World record holder and World champion spoke to journalists on Wednesday (11).

Speaking via an IAAF international media conference call from his domestic training base at the famous St Patrick’s School in the Kenyan town of Iten, Rudisha looked ahead to his race in Doha which will be his first outing over two laps of the track following his 1:44.33 in Melbourne in March.

“Last year, I was a little bit worried because I missed some races in the early season because of injury; but I was lucky, I managed to come good at the right time and did well in the remaining races which took me to the top of the 800m rankings.

“My training so far has been going well, I’ve just come back from Australia where I was running in two meetings. Last year I came back from there and then I got injured but this time there has been no problems, I feel good.

“This year I’m feeling very comfortable at the moment and I don’t want to change anything. I’ve been competing in Doha since 2007, apart from last year when I was injured, it’s a good place to go early in the season and it’s been part of my regular programme and I like to compete there.

The last time Rudisha ran in Doha, in 2010, he came out on top of an enthralling battle with his compatriot Asbel Kiprop and crossed the line in 1:43.00, a superb time for a race in the middle of May. It was a victory that set the scene for his unbeaten record-breaking year which culminated in him being voted as the World Athlete of the Year.

This year, who will be facing on the start line in Doha is still unknown but Rudisha was not worried about what hand fate will deal him in the coming weeks.

“There will be a lot of good guys, many Kenyans, I know that. I also know Abubaker Kaki will be there but I don’t know if he will run the 800m or 1500m. However, I don’t think about one particular person or another. I train to be ready to handle any situation,” added Rudisha.

The runner everyone else is thinking about though is the young Ethiopian prodigy Mohamed Aman, who handed Rudisha his first 800m loss for two years in Milan at the end of last summer.

Aman has since gone on to even greater things and won at the IAAF World indoor Championships last month.

“I know he’ll be coming back and having a lot of hope but maybe the defeat in Milan was a good thing for me as well, it triggered me to do better. Of course, I was disappointed to lose that race but I can see how it has made me stronger.”

The pair could not only be battling in various Samsung Diamond League races during the summer but also for the gold medal at the 2012 Olympic Games in London.

“This will be my first Olympics although, of course, I still have to get through the Kenyan trails. I could have been in Beijing, I was ready but unluckily I was injured just before the trails and I missed them and the whole season after that.

“I have always been having that dream that I can go to the Olympics and I have the dream of hearing the Kenyan national anthem as I stand on the podium. It would be a great feeling because winning at the Olympics is no small achievement. It’s what I have always wished for.

“My father was at the Olympics in 1968 and won a silver medal (in the 4x400m relay) and now I want to bring home a medal so that we can have two medals in our house.”

Rudisha also revealed will try to emulate his father in another way and will be making himself available for Kenya’s 4x400m relay team, in which he is likely to be a very useful member judging from his occasional outings over one lap of the track.

“In fact there were plans for me to run in the relay in Berlin (at the 2009 World Championships), maybe in the heats. This might be the right time as it comes after my specialty. I have the flexibility now, I think I can do it.”

However, his number one priority is obviously still to win over 800m. If he achieved that feat then he would become the first man in his event to simultaneously hold the Olympic and World titles as well as the World record, something which evaded his immediate predecessors as the fastest 800m runner in history.

“I have also watched videos of the races Wilson Kipketer and Sebastian Coe, especially when they set the World records. I like looking at those races from time-to-time, but they never won an Olympic gold medal at 800m so if I was to do that then that would make things complete,” reflected Rudisha.

Phil Minshull for the IAAF