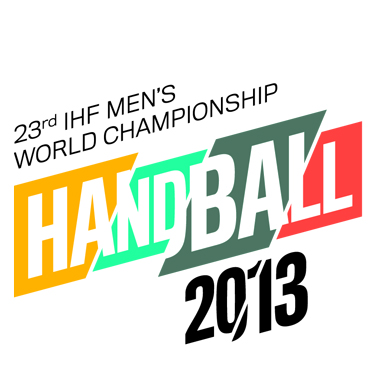 The draw event for the XXIII Men’s World Championship in Spain took place in Madrid on Thursday, 19th of July, conducted by Leon Kalin, Chairman of the IHF Commission of Organising and Competition (COC) and in presence of IHF President Dr Hassan Moustafa and Juan de Dios Román, President of the 2013 WCh Organising Committee.

The Men’s World Championship will be played from 11 to 27 January 2013 in Barcelona/Granollers, Madrid, Zaragoza, Seville and Guadalajara with the final weekend in Barcelona.

And host Spain chose the toughest of all preliminary round groups: The Iberians will face 2003 World champion Croatia and Hungary, teams they will face at the preliminaries of the 2012 Olympic Games in London too. Aside the two Northern African sides of Egypt and Algeria and Australia will be in the group of the WCh host, which will compete in the Spanish capital of Madrid.

Defending champion France will face its 2007 predecessor Germany in the preliminary round. Besides, the team of Claude Onesta has the two continental champions Tunisia and Argentina (best-ranked non-European team at the 2011 WCh in Sweden) and additionally Montenegro and Brazil in its group, which will be played in Barcelona and Granollers.

Group B (played in Seville) is headed by European champion Denmark – and includes four teams from Europe (FYR Macedonia, Iceland and Russia). 2015 WCh host Qatar and Chile complete this group.

Spain is host of a Men’s World Championship for the first time. Their hopes and dreams are to claim their second title after 2005 when they won the final in Tunisia against Croatia, the team they will face in their preliminary round on home soil this time.

The draw result is the following: