Home  »  OTHER SPORTS   »   WSB to decide the strongest in Selimov 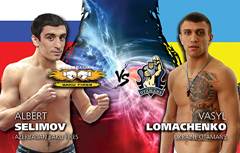 Lausanne, Mar 27, 2013: Following the first leg of the World Series of Boxing (WSB) quarter-final when Ukraine Otamans inflicted a tough 5-0 on Azerbaijan Baku Fires in Kyiv, the whole boxing word is in a fever of expectation for the second leg in Baku. A major reason of excitement stands in the presence of two-time Olympic Champion and two-time AIBA World Champion, 25-year-old Otamans Vasyl Lomachenko and Azerbaijan Baku Fires’ top boxer, AIBA World Champion in Chicago, Albert Selimov.

The Ukrainian supremo Lomachenko and the highest ranked Lightweight (57-61kg) Selimov have just met twice in their career, but their confrontations are since in the legend of the sport. Lomachenko is unbeaten since 2007, with the exception of against Selimov, who smudged this perfect pathway defeating the Ukrainian idol in a narrow final at the AIBA World Boxing Championships Chicago 2007. Since then, Lomachenko was dreaming of revenge. That happened a year later when the Ukrainian eliminated Selimov in the first preliminary round of the Beijing 2008 Olympic Games before winning the gold medal and the best boxer trophy.

Since Beijing, the two stars have not met in any international competition. WSB made this third battle real and the eternal rivals are now offered the chance to show their talent.

“I can’t wait for the weigh-in when I will look into his eyes, confessed Lomachenko. I am also impatient about this fight, as it will finally dissolve all remaining doubts about who the best boxer is”.

Southpaw Lomachenko has competed in more than 300 contests throughout his amazing career. So far he won all of his three WSB fights thanks to his insolvable style. He seems to have all skills to make Selimov’s job in Baku an impossible mission. The Ukrainian hero has a great advantage with his extremely quick footwork that gives him enough time to land his powerful punches.

His Russian rival was born in Dagestan in 1986 and won the 2006 European Boxing Championships in Plovdiv, Bulgaria as his first major competition. The Lightweight star signed for Azerbaijan Baku Fires at the start of this WSB Season III. He already won four contests (no losses) in the group stage. Selimov is famous for his heavy blows but he might need to be at 120% to beat Lomachenko in their anticipated battle.

This fight will also be decisive since the Otamans overwhelmed their Azeri counterparts to win the first leg 5:0. Therefore Selimov’s victory over Lomachenko is mandatory. —- WSB