Astana, July 14, 2017: Twenty of the best boxers in the world gathered on Friday morning in Astana for the WSB Season VII Final Weigh-In, with the Astana Arlans Kazakhstan and Cuba Domadores teams both going for a historic third title on Saturday afternoon. 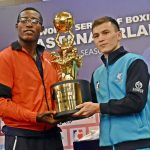 The intensity was palpable and the mind-games began early as the Kazakh and Cuban athletes faced-off ahead of what is likely to be one of the greatest matches in WSB history.

At the subsequent Press Conference, AIBA President Dr Ching-Kuo Wu introduced this year’s Grand Final, joined by key figures from the worlds of Kazakhstan and Cuban boxing and sport.

“Every year since its inception, we have seen this unique team competition evolve and grow, developing into one of the most eagerly anticipated and exciting events in the boxing calendar.

The addition of the team dynamic to what has always been one of the world’s great individual sports has captured the imagination of spectators and franchises alike, its popularity underlining our belief that it is innovations like the WSB that will keep entertaining the fans and breaking new audiences and markets around the world.

World Series of Boxing (WSB) is a unique team boxing competition and one of the most exciting sports leagues in the world.

Beginning in February 2017, Season VII sees 12 teams compete in three regional groups; America, Europe/Africa and Asia, with home and away matches, consisting of five bouts each, between the group rivals.

The top two teams from each group and the two strongest third-placed teams will qualify for the play-offs, which assume the format of four Quarter-Finals, two Semi-Finals and the grand Final in June.

The world’s premier boxing series is a hard-fought competition of unparalleled intensity, speed and power, where boxers compete across five rounds, scored using the 10 Points Must system.

Season VII is set to build on the enormous success of Season VI, and features the return of franchises from France and Italy and the stars of the Rio 2016 Olympic Games.

WSB boxers accounted for 23 Olympic medals at the Games, including 6 golds, adding an extra dimension of excitement and competition for both the fans and the boxers.